Suburbs Pitsunda - photos, what to see 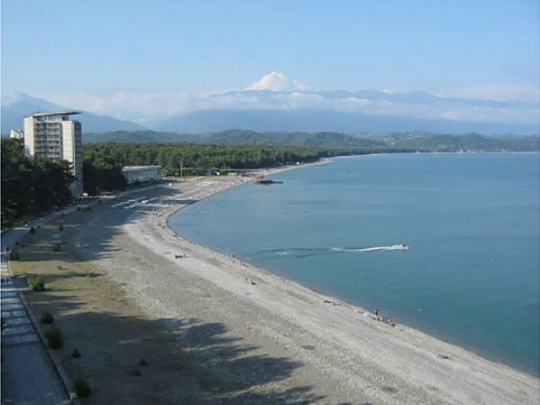 Climate beach resort Pitsunda - suburbthe city of Gagra and a favorite place of Russian tourists from the Soviet era. Get a ticket to Abkhazia has always been considered a great success, and today, thanks to the discovery of new possibilities to travel independently, you can remove the private accommodation and enjoy the sea and sun, regardless of the mode and schedule and resorts.

The most popular excursion from Pitsunda - a tripon mountain lake Ritsa, located in the wooded valley of the rivers and Yupshara Lashipse at an altitude of 950 meters above sea level. The surrounding mountain ranges form a picturesque landscape. The height of the mountain is more than three kilometers and they seem gigantic walls of the bowl. Riza extends for two and a half kilometers in length, and its width reaches almost 900 meters. The depth of the reservoir is quite impressive - 60 meters to an average of 131 in the lowest point.
The lake is fed by mountain streams and melting in the springsnow, but because of its water temperature does not exceed 17 degrees even in the height of the swimming season. Color water surface Riza varies depending on the time of year. In summer, it develops special algae that give the yellow-green color of the lake bowl, but in winter the water is bright blue and is particularly beautiful.
Fans of recent history can take a tour at the garden of Stalin and Brezhnev on the lake, where the preserved authentic interior of those years.

In the footsteps of Sherlock

Another unique attraction inPitsunda surroundings - a suburb of Gagra - Gegsky waterfall called another Circassian. It is formed by the waters of the river, falling from a height of nearly 70 meters in the northern spurs of the Gagra Range.
Gega - a typical mountain stream, having a length of just25 km, but pleases tourists for its picturesque beaches throughout the course. At one of the stations, passing through karst crevice, Gega turns into a beautiful waterfall. Ice and crystal-clear stream served as the shooting location of the famous Soviet TV series about Sherlock Holmes. Scene battle hero Vasily Livanov with Professor Moriarty at the Reichenbach Falls was shot in reality in Abkhazia.

As can act as a suburb and Pitsundacity ​​of New Afon, the main attraction of which is the New Athos Monastery, founded in 1875, who came from the old monks of Mount Athos in Greece. Among the priceless relics of the monastery - the relics of the apostle Simon the Zealot, retire and praying in a cave near the monastery. In the I century he preached Christianity in Abkhazia, Libya and Judah.

Children's camps in Perm for the summer. Children's ...

Where to go with children in Sevastopol. Entertainment ...