Sukhumi - the capital of Abkhazia 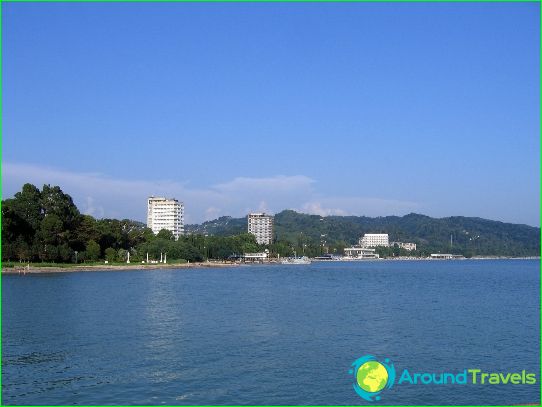 The capital of Abkhazia was founded 2,500 years ago. Today Sukhumi - the perfect place for a holiday, received the status of the spa town.

The park was founded in the 19th century physicianBagrinovsky. In this endeavor, he helped Lt. Gen. N.N.Raevsky. At the moment the botanical garden of Sukhumi - one of the largest in the region. plant collection includes more than five thousand species, and the total area planted - about 30 hectares. The most famous exhibit of the garden is a linden tree that grew in this place before his favorites. Tree for more than 250 years. It survived the bombing, looting and Hurricane, who inflicted great damage to gardens.

This seaside promenade - the most picturesque place of the capital. It was built in the early 20th century. Walk around the city is best to start from here.

Quay Maharadzhirov has completelyamazing look. Historic Company, former hotel "Russia", the host in 1925, Sergei Yesenin, houses of white stone with interesting verandas and balconies and mansions of Venetian bricks - this is the promenade of the capital. Add to this the numerous restaurants, cafes and hotels and get a perfect place for an evening promenade.

The construction dates back to 1948 and is owned byarchitect J. O. Kvaratskhelia. The design consists of two halves, with a single pedestal. Halves colonnade combine to form an arch through which you get to the famous promenade. The top of the colonnade is decorated with two miniature domes.

Colonnade Sukhumi - not just a symbol of the capital. Its neoclassical profile calling card has become the whole of Abkhazia. Sukhumi colonnade became the prototype for many similar facilities that can be found in many resort towns.

It is located on the Theatre Square, near the Theater Samson Chanba. Fountain was built in 1947.

Fountain quite sculptural compositioninteresting. Mythical characters - Griffins concrete, coated with gold - from their mouths produce powerful jets of water. In the evening the animals beautifully illuminated.

Red Bridge connects the banks of the bustle of the river,which flows through the capital. He stands here for about a century, and this was a beautiful name because of its color - the bridge is traditionally painted in red color.

Red Bridge - a bright spotSight. Widespread fame brought him the events of the Georgian-Abkhaz war. He was the first line of defense in time of war. The left bank of the river served as a home to the officers' barracks belonging to Sukhumi reserve regiment. Now at this point you will see a military sanatorium.

How to fly from Yekaterinburg to Moscow? Time ...

Holidays in the UAE in April: the prices and ...