Home>Articles about Abkhazia>Flag of Abkhazia: photos, history, the value of the state flag colors of Abkhazia

Flag of Abkhazia: photos, history, the value of the state flag colors of Abkhazia 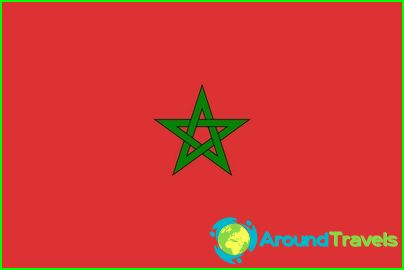 Flag of the Republic of Abkhazia is the national symbol of the country. It was approved in July 1992.

Description and proportions of the flag of Abkhazia

Abkhazia flag State isrectangular panel, whose width is half the length. Seven bands equal in width located on the flag field four green and three white. The extreme top and bottom strips are green. The top of the hoist Abkhazia flag is red rectangle whose width is equal to the width of the upper three bands of the flag. In the background white coated palm of the hand and the seven stars above it, arranged in a semicircle.
The hand is a symbol of Abkhazia came fromAbkhazian kingdom, formed in the VIII century. The seven stars on a red field - is the symbol of the seven historical regions of the country, which have become the modern family areas today. The number 7 is sacred to the people of this country, and therefore seven bands on the national flag were also not accidental. They symbolize tolerance, which entitles you to two religions coexist freely on the territory of Abkhazia. Green lanes - is Islam, and white - Christianity.
President of the Republic of Abkhazia has its ownstandard, which is characterized by the presence of the coat of arms of the state flag. Heraldic shield divided in half green and white, decorated with the figure of the rider, flying on a horse and letting his bow to the stars. On either side of it on the coat of arms deposited eight-pointed stars. The colors of the emblem symbolize the youth, life and high spirituality of the people of Abkhazia. The eight-pointed star - the revival of signs reminding people of Abkhazia on the unity of Western and Eastern cultures.

The history of the flag of Abkhazia

State symbol of the Republic of AbkhaziaIt was created based on the flag, which in 1917 rose above the Mountain autonomy. This state of the North Caucasus united mountaineers of Dagestan and the Terek region. The author of the flag, which clearly traced motive character Mountain Republic, became an artist Valery Gamgiya.
Earlier the Abkhaz Autonomous Soviet Socialist Republic was as a flagred flag with the inscription "Apsny SSR" and the image of the solar disk with rays in the upper part of the hoist. Before this kind of Abkhaz ASSR flag coincide fully with the flag of the Georgian SSR, which included the Autonomous Republic of Abkhazia.

Food in Switzerland. Prices for food in ...