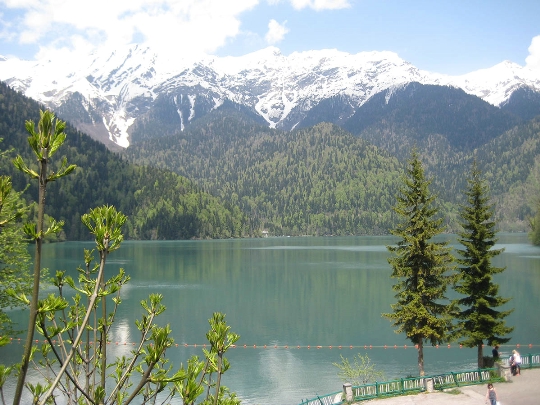 The tenth part of the occupied territory of Abkhaziaenvironmental facilities. They are important to scientists studying the pre-glacial flora, well-preserved and survive the unfavorable period of the geological epoch. For tourists reserves of Abkhazia - a unique natural landscapes, picturesque landscapes and the opportunity to diversify beach vacation, going to the amazing places for sightseeing.

On the shores of the Black Sea coast of Abkhazia locatedonce a land of ancient Colchis, which has shaped the life of the pre-glacial period. Today, it created a unique nature reserve, on the territory of which grows a hundred species of plants found nowhere else on the planet. Pitsundsky Peninsula and adjacent land Myussera hills are home to rare plant species of more than eight hundred, two dozen of which are listed in the Red Book. On the territory of Pitsunda-Myussera reserve Abkhazia relict pine and boxwood Colchis, arbutus and oak Iberian. The subtropical climate in the national park ensures the opportunity to visit it at any time of the year.

Home pride Ritsinsky National Park -Big Lake Riza, hidden in a deep wooded valley. It is able to change color depending on the season, but in its clear waters inhabited by trout and many other fish species.
Of particular delight visitors of this reserveAbkhazia is Gegsky waterfall falls from 55-meter height in the form of luxurious snow-white plume and dissolving in the same canyon. Excursions on Lake Riza, and the reserve is very popular with tourists vacationing on the beaches of Abkhazia. The road does not take a lot of time and this trip makes it pleasant to diversify the holiday by the sea.

Typical for the distant green continentEucalyptus feels great and Pskhu-Gumista Abkhazia Reserve, founded in 1978 in the central part of the country. Of the other tree species is guarded by oriental beech, Caucasian hornbeam, Colchis boxwood and black alder. Some trees - champions of the world scale, and the diameter of the trunk of a fir Norman, for example, can reach two meters, and yew berry - one and a half meters.
The administration of the reserve is located in the citySukhumi. For excursions in the national park should hire a guide - military action on the territory of Abkhazia, have left a lot of unpleasant "surprises" on the reserved land.

What to buy in Salzburg. What to bring out ...