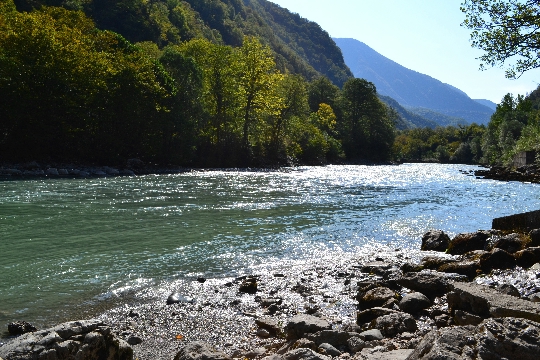 All the rivers of Abkhazia originate on the slopes of the Caucasus Mountains (southern slopes) and all end up the way, falling into the waters of the Black Sea. Type of food rivers mostly ice.

One of Abkhazia rivers originating on the slopesWestern Caucasus (the height of 2300 above sea level). The total length of the channel - 110 kilometers and throughout its length river unnavigable. The river passes through a narrow gorge bottom.

The total basin area - 1510 sq.km, but in spite of this relatively small figure, full-flowing river of extraordinary. The reason is that in the West Caucasus drops a lot of rain.

In the waters Bzyb found a lot of trout and Black Sea salmon. In addition, the river is interesting as a route for water tourism. But it is worth remembering that this is one of the most difficult to pass the rivers of Abkhazia.

Riverbed geographically belongs to twostates - Abkhazia and Georgia. The total length of the Kodori Gorge - 170 kilometers. The source of the river is located on the Main Caucasian Ridge (near Naharskogo pass) and it is the confluence of two mountain rivers - Saken and Gvandra. Kodori - the typical mountain river with a very rapid current.

One of the Western Caucasus rivers. At the moment, the river bed is a natural border between Russia and Abkhazia. The river is small, only 53 kilometers. Source Psou is Agepsta on the mountain, and flows into the waters of the Black Sea.

Despite the fact that the river is short, it is veryfast and abounding. This is explained by the fact that on the slopes of the Greater Caucasus (its western part) falls absolute maximum rainfall - up to 3000 mm during the year. In its upper reaches the river runs high among Turih mountains, slopes are covered with dense fir forests.

Until the mid-nineteenth century, the river valley waspopulated by ethnic Abkhazians, but after the Muslims migrated to the territory of Turkey, this area is almost empty. People here again appeared only in the last years of the last century.

The river runs through the northern part of the territoryAbkhazia. The source of the river - the water of Lake Riza. It falls into the water Gega. The total length of the river just 12.6 kilometers, but with an average flow of bias - 48.7 m / km. The maximum water level in the river is in May and the lowest level recorded in February.

Along the course is located on highwaytowards the shores of Lake Riza. And this route is very popular among tourists. During the summer, ground riverbed dries up completely, because Yushpara has an underground channel.

On the set thresholds of the river as it passesat the bottom of a narrow and deep gorge. And that makes the river extremely interesting for rafting. The total length of the sports section up to 9.1 kilometers.

What to buy in Tallinn. What to bring out ...

Holidays in the UK in February: prices and ...