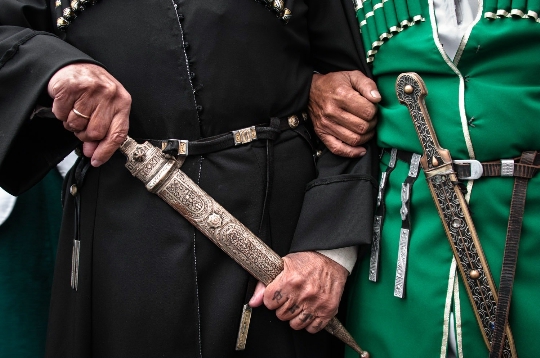 Legend has it that God gave all the people of the land,when on his doorstep suddenly appeared Abkhazia. It was late only because receive guests in his house, and could not leave him alone, not giving the required honor. The guest was the angel who told God about the warm welcome and respect, which gave him the Abkhaz modest home. Then the Most High gave the Abkhazian land, which is reserved for himself. So there was one of the most beautiful countries on the planet. This legend wonderfully conveys all the major traditions of Abkhazia and especially the character of its inhabitants - the hospitality, calmness and modesty.

It is said that Abkhazia tradition based on ancient culture called Apsuara. This concept means for Abkhazia faith and life principles, rules of conduct and basic laws.
Reverence for elders - an indisputable truth thatAny resident of Abkhazia absorb with their mother's milk. With senior pending argue his orders are carried out unquestioningly and authority - is indisputable. At the same time, even the elderly and respected man stands up, if the child comes into the house. So Abkhazians vaccinated children respect and emphasize that the younger generation - the future of any nation.
Every meal begins with washing hands. According to the tradition of Abkhazia, first perform the ritual of the senior family members and guests. The other participants are waiting for the meal, while the first two do not sit at the table and only then proceed to the bathing ceremony.

The capital of the United Arab Emirates: map, photo. What is the capital city in ...