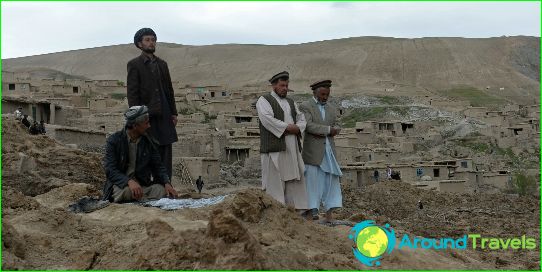 The history of this state includes fourthe main period of its formation. Each era has left its mark on the development of the country and we can say that the Afghan culture preserved customs and traditions, and paganism and Hellenism, Buddhism, and Islam. Either way, the cultural heritage associated with the religion, the dominant state in the territory of a particular historical period.

The earliest period in the history of cultureAfghanistan belongs to the pagan times. More than four thousand years ago in the agricultural settlement of the Deh Morasha Gonda was built sanctuary, decorated with terracotta figures of the Mother Goddess. A little later, there was a round temple in the area Dashly Dashly Thapa.
Hellenistic period in the Afghan cultureHe left to posterity Greco-Bactrian ancient city of Ai Khanum. To this day the ruins of the palace complex, the temple-mausoleum and the main religious buildings, decorated with a statue of Zeus. Theatre, excavated in the territory of Ai-Khanum, is the only such facility in Central Asia. The heyday of the city came in the III century BC and destroyed his nomadic tribes in the II century BC. e.

History of the Bamiyan Valley

Buddhist monasteries appeared in the territoryAfghanistan in the II century and at the same time the construction of the giant Buddha statues of Bamiyan was started in the valley. They were carved into the rock, and supplemented by a solid plaster. Introduced in 2003 in the UNESCO World Heritage giants have already received by then serious "wounds" from the Taliban's hands, believing that the "pagan idols" to be destroyed.
Fortunately, in the convent of the valley discovered another giant statue of a reclining Buddha, which scientists have conducted excavations at the moment.

The Taliban and their "legacy"

Came to power in most of thecountry group "Taliban" in 1996 took control of many of the objects, and entire cities and provinces. Culture in Afghanistan has suffered a huge loss as the spiritual leaders of the Taliban differed intolerance to any other religions and their customs.
The current government has formally gainedvictory over the Taliban factions, but the restoration of cultural and historical sites in Afghanistan is impossible in view of the difficult economic and political situation in the country.