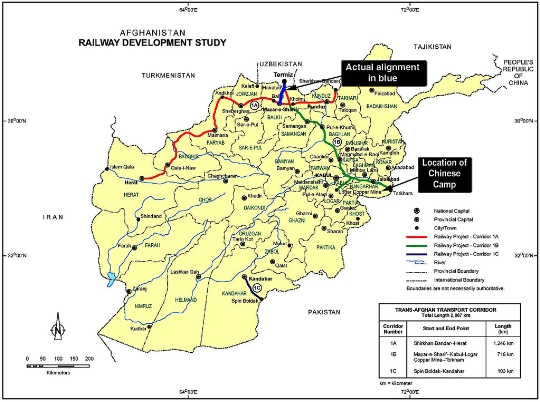 The railway network is gradually Afghanistanexpanding. Previously, the state had an underdeveloped transport system, but now things are better due to the construction of new branches. Railways Afghanistan - a broad-gauge line (1435 mm). They were erected neighboring countries: the USSR, Iran, Uzbekistan. In the railway sector, there are two main problems: the uncertainty of the parameters of the track and mountain terrain. Especially important is considered the question of the gauges, because it determines the direction of Afghanistan, integration of transport and the economy. The regions that share common border with Afghanistan, exploiting different track widths. To cooperate with Europe through Russia and Central Asia, Afghanistan, railways require track 1520 mm.

To date, the country has 25 kmtracks. These are two roads for transportation. Passenger trains are absent here. In 1960 it was built the railway line no more than 10 km on the line Kushka - Toragundi. In 2007 this road was reconstructed. Another access road runs from the station. Galaba to Hairatan. In recent years, Afghanistan has become an attractive region for rail operators in neighboring countries. These include, first of all, Uzbekistan and Iran, to develop projects for the construction of new routes across Afghanistan. The first project was created by the British more than a century ago. Railway track on Kandahar was built in 1879. Then the construction of the lines continued after 1960. Currently, the Afghan government is committed to ensuring that the terms of w / e transport was controlled by the state. Expansion rail system entails a positive change in the country. Railways Afghanistan significantly accelerate the pace of development of economy and industry.

The reasons for the weak development w / d system

The economic sphere of the country fell into disrepair after theprolonged military action. Afghanistan has left more than a third of the population. Many trade and transport of the country were destroyed between areas. As a result of the war it has deteriorated condition of railways and roads. The country has almost no repair work is carried out on the roads. Many paths become impassable in winter and spring. People are forced to carry loads on donkeys and camels. In connection with this essential acquired encircling highway beginning at Kabul. Changes in the country led to the construction of new railway lines. Nevertheless, Afghanistan remains one of the poorest countries, which is dependent on neighboring countries. Poor infrastructure, crime, bad management - these are the factors hindering the development of the economy.