Home>Articles about Afghanistan>Kitchen Afghanistan: photos, recipes and dishes of national cuisine of Afghanistan 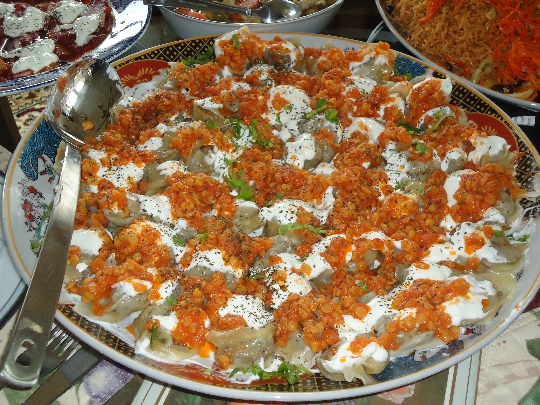 Kitchen Afghanistan has developed under the influence of Iranian, Indian and the culinary traditions of Central Asia: its basis is thick soups, different kinds of pilaf and shish kebab, cakes "naan".

Widespread in Afghanistan received a kitchenpilaf: distinguish "Palauan-e-shahi" (it added pistachios, raisins, rice, lamb, kurdjuchnyj oil, clove), "Kabul-Saw" (it is prepared with raisins, lamb, rice and carrots), and others of his species. As a rule, the finished pilaf served cheese, yogurt, hot sauce, side dishes of beans, grains and vegetables. Speaking of soups, cooked in Afghanistan "Schorb" (soup with rice), "Schorm" (soup with vegetables), "mushavu" (soup with yogurt and legumes).

Interested in sweets? Taste halva, "bichak" (cake with jam and other fillings), "firni" (dessert in the form of a milk pudding with pistachios), candied nuts, cookies "gauche-fil".

Where to try Afghan cuisine?

Tipping in restaurants is not mandatory Afghanistan, but good service, you can round off the amount in favor of the waiter or leave him a tip cash consideration in the amount of 5% of the total bill.

It is worth noting that the tourists do not spoil the localrestaurants your attention, so you can not say that in all institutions the power level of service is at the height, but in any case they have colorful, pamper guests with traditional meat dishes and very expensive alcohol (high price on alcoholic beverages due to the fact that the country is forbidden its use).

In Kabul, you can look at the restaurant "Serena", whereGuests can feel safe (for this purpose there are taking serious steps), to be treated with Afghan dishes, preparing on the grill and delicious desserts, as well as have a great time, enjoying the live music.

In Kabul, you will be offered to go togastronomic journey through the local restaurants - there apart from getting a pleasant dining experience, you can take an active part in the process of cooking some colorful dishes.

Arrival in Afghanistan is possible to podgadatthe celebration of Nowruz (March 21) - on this day, you can try the special Afghan dishes for cooking which is mainly used by beef and wheat, as well as taste the celebratory drinks such as Haft-Meva (it is made from fruit 7).