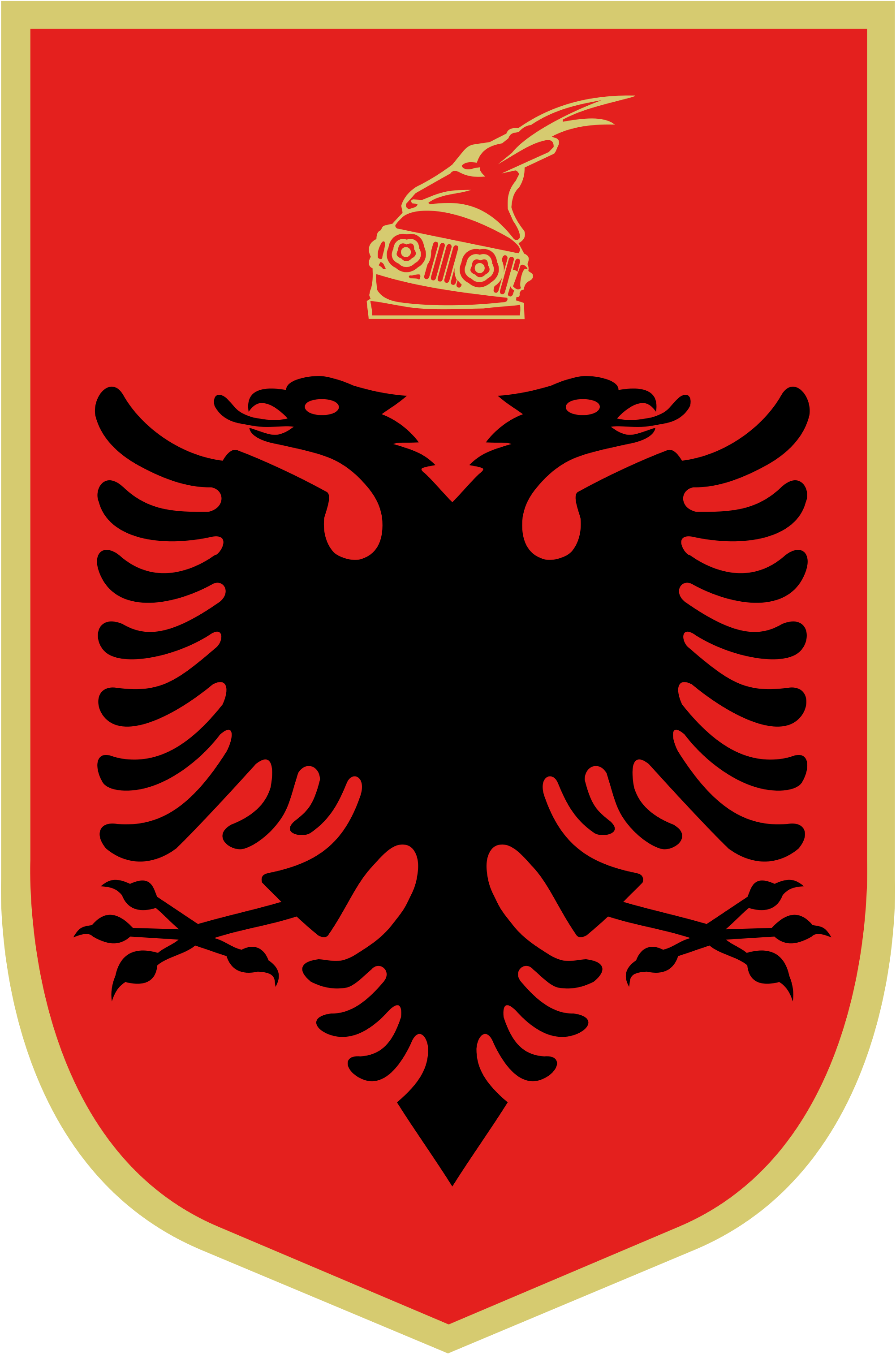 The small European state in the twentieth centurytwice became tragic point on the world map, as it is after the events took place here started world wars and the division of the world. Coat of arms of Albania becomes a vivid symbol of the desire for freedom and independence. It was identical to the emblem of the Byzantine Empire, at the time, opposing the aggression of the Ottoman Empire.

Simplicity pattern and depth of meaning

For its main official symbol of AlbaniaI chose the image of a stylized double-headed eagle. On the local coats of arms and shields, he appeared in the XV century, once having tried the role of independent character. The color scheme of the logo reserved: scarlet (red) shield with gold border on a path; black double-headed eagle; golden helmet great Skandenberga.

It looks a coat of arms is very strict, slightlythreateningly at the expense of the selected color to a bird of prey. This coat of arms had the representatives of the ancient feudal family Kastrioti. However, the shield was a golden color on top of the composition accomplishes a white star with six ends.

George Skandenberg - one of the brightestmembers of this genus, which went down in history of Albania as a great military leader, statesman. It was he who in 1443 became the leader of the struggle for the unification of the country's independence from its neighbors. Strategy and tactics successfully resisted the Turkish invasion, he repeatedly made forays into the enemy's rear. His death from malaria entailed terrible consequences of his peers commanders in Albania is not found, and more than four hundred years, the country fell under the yoke of the Turks. But the red-and-black colors and eagle all began for the local population a symbol of freedom.

In addition, there and the popular belief that the Albanians - Eagles descendants, the great and the proud birds. And even the name of the state with the Albanian language can be translated as "Land of Eagles".

Anti-Turkish rebellion that occurred in 1912year, has returned the country's independence. Among the first, the most important things was the approval of the main national symbols. In memory of the great eagle Skandenberge took place on the coat of arms of Albania. In 1926 he added another character, also associated with the name of the great commander - a golden helmet.

After World War II to power in AlbaniaCommunists came, who tried to change the main symbol of the country in the spirit of the older Soviet brother. There was another element - wheat wreath, which symbolizes an important branch of economy of the country. Wreath twine red tape, which was the date of the country's liberation from the Nazis. In 1991, Albania has returned to the original version of the coat of arms.

Flag of Grenada: photos, history, the value of the state flowers ...