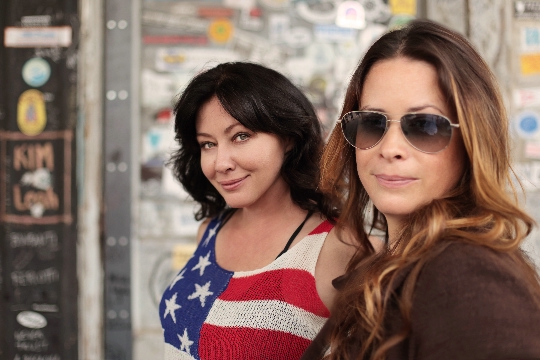 In the world there are many beautiful places onwhich few people know and do not even realize. It is unlikely that you will be able to find them in the guidebooks or hear from friends that someone had been there. They are hidden from the eyes of the set, and this is why retain their magical beauty. Leading the show "No Map" on TV Travel Channel Shannen Doherty and Holly Marie Combs - known actress who became popular thanks to his roles in TV series "Beverly Hills, 90210" and "Charmed." Leading Star offer a unique selection of unknown places from around the world, which you only dreamed of!

Unusual castle made of stone, iron and non-ferrousglass, built by a single person, is located in the mountains near the National Park San Isabel National Forest in Colorado (USA). Tall tower entwined spiral staircases and railings, roof revolves round the dome of metal mesh, and next even has its own bell tower. This building, the tallest tower which rises to 49 meters, created only two hands! This story began in the late twentieth century, when the 15-year-old boy named Jim Bishop became the owner of a large area. In 1969 he began the construction, initially suggesting to build a cottage. Neighbors often joked that the building looks like a castle. They have pushed the young man to the idea. Jim had no plan or project, he simply imagined in his head, as the next part of the castle should look like, and embodied the idea into reality. The castle has several built-in fireplaces, lots of arches and metal sculptures. The facade is crowned with a dragon's head, let the moment flame from the built-in container.
Today, Jim Bishop, his seventh decade, lives in a castle with his wife and hopes that his children and grandchildren will maintain and develop the castle as a tourist site.

Huacachina - a tiny resort town in the desertSechura Desert near a small lake, where only 100 people live. The place is known as the "Oasis of America", as it is one of the few natural oases that have been preserved in the territory of North and South America. According to local legend, the lake arose after the beautiful girl was caught off guard a young hunter while swimming in the pool. The girl managed to escape, and the pool turned into a lake. The folds of her mantle steel dunes surrounding Huacachina, and she soon returned to the lake and still lives there mermaid. Today oasis supplied with water from other sources in order to prevent an ecological disaster and to prevent the extinction of this wonderful place.

Mountain Mont Aiguille at 2000 meters towers overFrench community Shishilyan. In appearance it resembles a large sticking a finger and has steep walls on all sides. Mont Aiguille is also known under the name "Unattainable Mountain". Her top was not conquered until 1492 and long fired the imagination of the French. At the request of the French king Charles VIII, it was the first climbing altitude - the first mountain on which people decide to climb just like that, out of pure curiosity. I must say that the climb up the mountain is not so easy because of its difficult terrain and sprawling in its valley forests. So far, it is believed that its conquest was born climbing.
Nest Monastery Tiger, Paro Valley, Bhutan

Tiger's Nest (otherwise Paro Taktsang) - famousMonastery Bhutan. It is located in the valley of Paro and hangs on a cliff height of 3120 m. According to the legend in the VIII century in a cave on the rock suffered Padmasambhava Buddhist leader, sitting on the back of a tigress-demon, he was able to tame. An alternative legend has it that she was not a tigress demoness, and the former wife of the emperor who voluntarily became his student. Whatever it was, the teacher left to meditate in one of these caves, eight showed embodied forms (manifestations), and so this place was sacred. Padmasambhava brought Buddhism Mahayana to these lands and became the "patron saint of Bhutan." After the death of Padmasambhava in Nepal, his body miraculously returned to the monastery and, as they say, was immured in a mortar near the front stairs. Starting from the XI century, many Tibetan holy and noble people to come here to meditate. The place has become popular, and erected a temple here. The slopes of the rock where the monastery is built, almost vertical, and exterior walls of the monastery buildings were built at the very edge of the cliff. Near the monastery is located, and the very cave where Padmasambhava meditated, but there was only one holiday when there allowed all comers.

What to bring to the UAE. What kind of things and ...