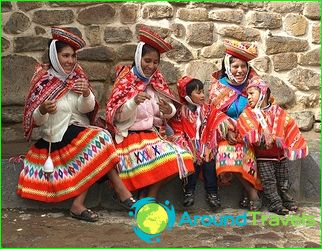 The population of South America is more than 350 million people.
Prior to South America was populated by the end of the XV centuryIndian tribes and peoples who spoke languages ​​such as tipigua-Rani, Quechua and Chibcha. They're making themselves at home in the mainly Tsentralnoandiyskoe Highlands (its high valleys). But with the advent of the Europeans (Spaniards, Portuguese), the indigenous population was exported to Peru, Venezuela, as slaves to work on plantations and mines, and South America began to settle immigrants from Italy, Germany and other European countries.
For the most part, the current population isIndian, European and Negro-European origin. In addition, in many countries of South America live large Indian peoples, for example, in Peru and Ecuador - Quechua, and in Chile - Araucanians.

On average, 10-30 people live on 1 km2, butleast of all the people living in the tropical forests of the Amazon and some mountainous regions of the Andes. With regard to the densely populated areas, is one of those areas is the Pampa (it occupies the whole of Uruguay and northeastern Argentina).
Official language - Spanish, but, for example, in Brazil - Portuguese, and Trinidad and Tobago, Guyana - English.
Major cities: Sao Paulo, Buenos Aires, Rio de Janeiro, Lima, Bogota, Salvador.
The population of South America profess Catholicism, Protestantism, Christianity, Hinduism, Islam.

On average, residents of South America to live up to 65-70 years. For example, in Chile, the figure is 76 in Ecuador - 71, and in Surinam - 69 years.
Despite the relatively high life expectancy, the continent is characterized by a fairly high mortality rate among young people and dopensionnogo age.
The main causes of mortality: cancer, cardiovascular, infectious diseases, as well as poisoning, injuries and accidents.

Traditions and customs of the peoples of South America

Rituals - the main traditions of the peoples of South America. For example, in Brazil marriage the young have to be consecrated in the church, and "sorcerer" to be present at the festival, whose mission - to help the young to protect themselves from the evil eye.
Venezuela is famous for its main traditions -festivals, accompanied by dances and songs. In addition, a calendar full of various inhabitants of Venezuela holidays that they celebrate a fun and noisy.
Close attention deserve traditionresidents of Bolivia - Indians and descendants living here from mixed marriages (their traditions embody the true traditions of South America). His feelings they express the songs and dances (popular folk dances are Auchi, Auchi, pupa, roughcast).
Bolivians engaged in folk art - weaving and knitting (for the last 3000 years, it has not changed).
Another local custom is to usein use of coca leaves - they are usually chewed, insisting make them tea and spice them some meals (in European countries, coca leaves are considered a drug, and they are a tonic in Bolivia).
If you decide to go to South America, you make the right choice - you will be able to plunge into the mysterious life of this continent.

Children's camps in Canada for the summer. Children's ...