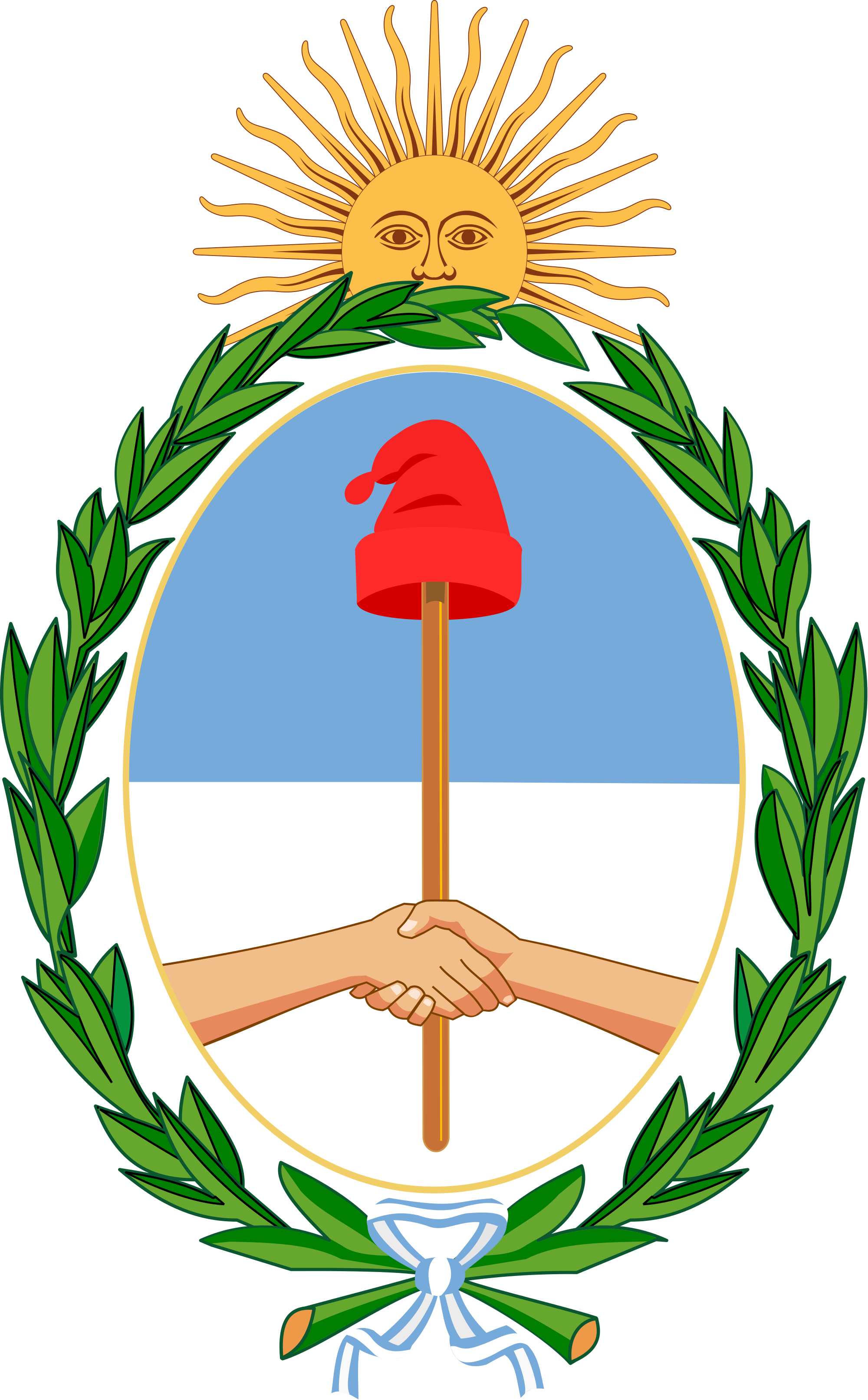 State of Latin and South America are not solong out on an independent path of development. Therefore, many of these countries have very young state symbols. The same coat of arms of Argentina approved in only in 1944 as the country's main character. However, it is based on an iconic image for the character of the country, marked with the seal of history.

Description of the coat of arms of the Republic of Argentina

Central leaf emblem is presented in the form ofoval shield. Field of its horizontal line is divided into two equal parts, painted in different colors: top - blue (or more commonly, blue), the lower part - the silver, most often transmitted via white.

Among the main characters on this board - staff andwearing a Phrygian cap on it. The colors - natural, natural, Staff brown cap - bright red. In the foreground on a silver background image of a handshake. Around the shield - a wreath of green laurel tree branches. Below these branches are connected and tied with a ribbon, for its design uses the same color as the shield. The main background of the tape - silver rim - blue. Above the shield shows the sun rising.

Each of these characters, even if it seems to someone primitive, full of meaning and many can tell a man, enthusiastic Argentine history.

Hood, depicted on the state coat of armsThis country is called the Phrygian or Thracian, after the region of Phrygia. Once she was in Asia Minor for many became a symbol of freedom and revolution.

In fact, such a felt or woolcap worn by the tribes occupying the Dacia, Thrace and Dalmatia. The right to wear it in ancient Rome or Greece received a slave, released into the wild. Clearly, the one who has on his head was a cap, was a free man.

Since the color of the hat was very bright andsaturated, then when equipped on its staff, it can serve as a banner calling for an uprising, liberation. Phrygian cap has lost its original meaning customary headdress and acquired a symbolic, and in different countries and at different times.

For example, this headdress is Marianne,It is a symbol of the freedom of France, Statue of Liberty on some American coins. The most widely spread this symbol in Latin and South America. His image is on many coats of arms, including the Republic of Argentina.

A trip to Latvia