Home>Articles on Argentina>Argentina Flag photo, history, the value of the state flag of Argentina colors

Argentina Flag photo, history, the value of the state flag of Argentina colors 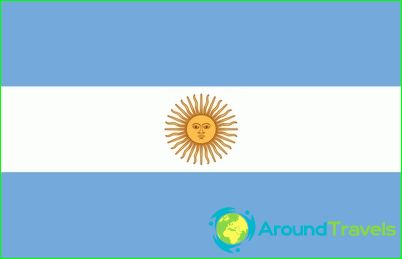 Three horizontal stripes of the Argentine flagare of equal width. The upper and lower band of blue. In the central part is a white stripe in the middle you can see the "Sun of May", which has sixteen long wavy rays. The sun on the flag derives its name from the May Revolution in 1810.

Historians believe that the blue and white flagdue to the fact that the young state had close ties with the representatives of the Bourbon dynasty. The Bourbons have lived in Spain, and the nation, therefore, proved faithful to this particular country, not Napoleonic France, which invaded Spain. It is also possible to draw an analogy with the cult of worship of the sun-god, who was present in the culture of the Incas. From this position, the blue stripes symbolize the sky and clouds.

The author of the concept was the national flagmilitary Manuel Belgrano. Thus, he tried to separate the armed forces of Argentina from Spain. Prior to this, both armies used flags with yellow and red flowers. The first flag was hoisted twenty-seventh of February 1812. This event took place in the town of Rosario during the battles for freedom and independence. The sun does not depict original flag, it appeared in 1818.

Formal adoption of the banner of the twentieth happenedJuly 1816. In this case there are two options flag. The first version of the sun is the official ceremonial, and one where there is no sun - a holiday. Both are official, but the flag ceremonies should be above festive flags. The flag is rectangular in shape. Aspect Ratio him - nine to fourteen. In 1897 saw the release of the first film of Argentine cinema - "Argentine flag" at the same time on the screens first appeared this national flag.

There is also a version that the blue color on the flag is a symbol of the La Plata River and the white color reflects silver. Another version - blue and white garments signify the Virgin Mary shades.

Prior to 1985, the use of rulesbanner of the state were more stringent. According to these rules, a ceremonial flag could be hoisted above the provincial, national and government buildings of national importance. Ordinary people could only hang a festive version of the flag, which is not the image of the sun. This decree was adopted in 1943. Now there are no rules. Each year, the twentieth of June in the country celebrate Flag Day.

Children's camps in Sevastopol in the summer. Children's ...