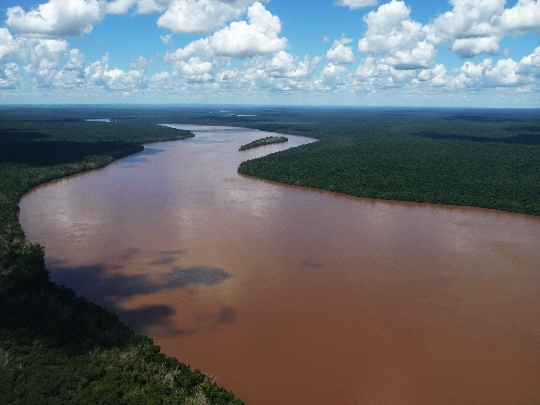 The most full-flowing river of Argentina are located in the northeastern part of the country and are part of the La Plata Basin.

Geographically, the river is in the westArgentina. Source Vinchina-Berchem - Patagonian Andes. Then she goes down and passes through the lands of the three provinces: La Rioja; San Juan; San Luis. The river is part of the Rio Colorado river system.

The source of the river is located at an altitude of 5500 meters abovethe sea level. river name changes depending on which border it passes province. So, in La Rioja the river called either Bonete or Hague. After moving into the territory of the San Juan river becomes Rio de Vinchina or Bermejo River. On the bank of the river is a major talampaya National Park.

The total length of 1320 kilometers of the riverbedand in translation from the Guarani Indian language means "big water". Source Iguacu is located in the mountains of Serra do Mar (about Curitiba) and is the confluence of two rivers - Atouba and Irai.

Upstream is very sinuous. In this part of the river flow has numerous waterfalls, all of which there are seventy. Average for Iguazu is much quieter and here the river is navigable for five hundred kilometers (within the State of Parana). In this area the river takes in about thirty tributaries. Downstream (up until the confluence of the Iguazú in the Parana) is the natural boundary between Brazil and Argentina.

Popularity Iguaçu received their duewaterfalls. Are they thirty kilometers from its mouth, where the river poured into four kilometers in width and forms a huge loop. The main part of the falls is located in Argentina. The total width of the waterfall is almost three kilometers. And every second from a height of seventy-five meters down raining down tons of water.

Falls were opened in 1542 and now attract many tourists.

Rio Salado translates as "salty river" is the right tributary of the Paraná. The river passes through three Argentine provinces of Salta;
Santiago del Estero; Santa Fe. The total length of the river - 1,300 kilometers. In the river there are a few names - Guachinas, Huramito and Rio de Pasach.

The source of the river - the eastern slopes of the Central Andes. In the upper reaches of a classic mountain river. After reaching the plain of the Gran Chaco within is divided into several branches, and the river bed is constantly changing. The river is navigable only during the period November-March. river flow is much shallower and sometimes even completely in some places, dry in the rest of the year (May-September).

The capital of Saint Vincent and the Grenadines: map, photo. What ...