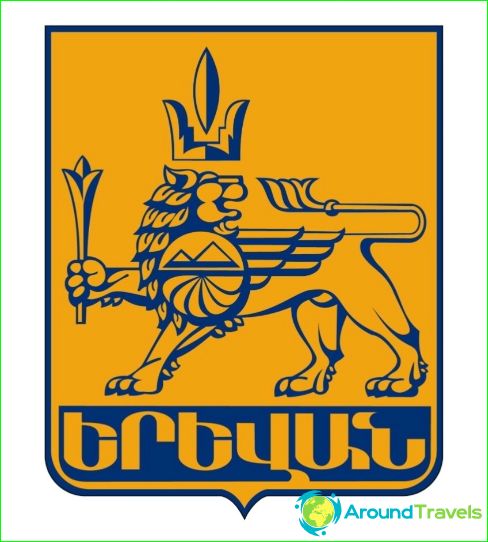 Many of the country, emerging from the USSR,the first thing changed the state symbols, returning to their roots, traditions and beliefs. This was true not only of this or that state, but also the capital. For example, a new coat of arms of Yerevan appeared in 1995, and the author of the sketch became a local artist Albert Sohikyan.

Description with a French accent

Any photo fixing the current image of the main heraldic symbol of Yerevan, will give the beauty and brevity. First, the artist chose to sketch only two colors, blue and orange.

If the first color among the three heraldicleaders, the orange color is used infrequently. The choice of these colors can be easily explained, blue symbolizes the beautiful river, sky, snow caps the mountain peaks. Orange - the color of the sun, heat their homes.

For the heraldic shield of the new Armenian characterFrench capital is selected form, strict enough, without any frills, moreover, underlined in blue outline. The same color is used for the background, on which is written the name of the city, it is, of course, in the Armenian language.

The same blue color corresponding to HeraldryAzure is selected for the main "hero", depicted on the emblem. It is a known predator, the king of beasts, which is accompanied by several important elements, including:

It may be noted a few interesting moments,associated with the image of a formidable predator. The image of the lion is not invented by the artist, it is only one of the stylized images of animals, which have survived to this day in the frescoes in the royal palace of Erebuni. Second, the lion is shown as if moving, as his front paw raised. This indicates the desire of residents to move forward, to grow, to look ahead. Third, the lion's head is turned back, it means that the residents of Yerevan do not lose their roots, respectful of tradition, history and the past.

The sign of eternity, located on the mainheraldic sign of the capital, is also a symbol of the desire to perpetuate their city in history, to outline its way into infinity. Mount Ararat, where according to legend landed Noah and his companions at the time of the Flood, today located in Turkey, but it is still associated with Armenia.