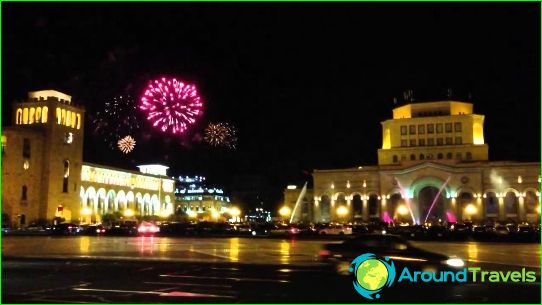 Holidays in Armenia, in particular, religious, marked widely and in compliance with the traditions.

The main celebrations of Armenia

Fans of event tourism should know that,usually in the spring in many cities of Armenia hosts music and cultural festivals, and in the summer - in almost all areas carried out traditional and modern festivals. Do not miss the chance to attend the festivities - plan to travel around the country at this time.

So, in October in the village of Areni (Vayots Dzor region)You can visit the Wine Festival - this time you can see performances of music, theater and dance groups, participate in contests and national games, and also taste a variety of wines.

And in September (Akhtala, Lori region) can takeparticipated in the celebration of the festival barbecue. It brings together chefs, that the audience put their skills into practice Barbecue (in the classic recipe they introduce new flavors). Naturally, the festival ends with a delicious tasting.

In addition to numerous events in Armenia yearly festivals, in the celebration of which is to participate during the rest of the country.