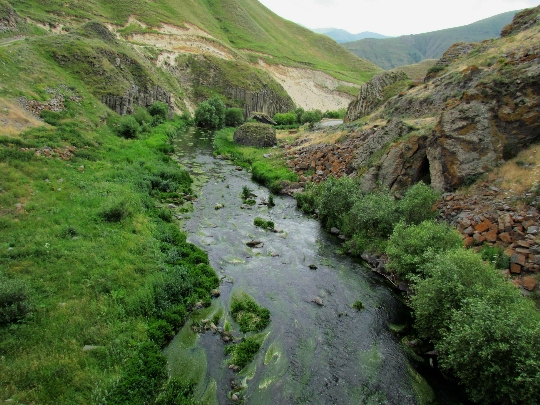 On the territory of the country takes a lot of rivers. Almost all Armenian rivers - tributaries of two large waterways of the South Caucasus - the Kura and Araks.

Aras - one of the largest rivers of the Caucasus. The source is located in the territory of the Armenian Highland (Turkey), but the mouth and the lower reaches of the river are located in the Azerbaijan. Average for the Aras is a natural border between Armenia and neighboring countries.

Arax - the biggest right-hand tributary of the Kura. The total length of the waterway - 1072 kilometers. unnavigable river water and it is used exclusively for irrigation.

Geographically, the river belongs to Armenia andIt is a left tributary of the Aras. The source of the river - the south-western slope of the ridge Geghama. The total channel length - 55 km. The bottom of the river throughout the stony. The waters of the river locals use for irrigation. In the middle reaches of Azat reservoir there.

Among the attractions located onbank of the river, stands out: Monastery Gekard (upper reaches) and Garni village (right bank). At the beginning of this century, the river was included in the UNESCO list of protected objects.

Geographically, the river bed is in two countries - Armenia and Georgia. On the territory of Armenia passes 152 kilometers of river flow.
Source - the merger of two rivers - the Dzoraget and Pambak in the Armenian village of Dsegh.

The river unnavigable. The channel passes through the deep narrow gorge. Approximately 12 kilometers of the river are the natural border between Armenia and Georgia.

Attractions: the city Akhtala, Alaverdi; Dsegh village, Odzun; Sanahin and Haghpat. On the territory of Sanahin is an ancient bridge, dating back to the twelfth century.

The total length of the channel - 89 kilometers and allIt is located on the territory of Armenia. The source of the river - the foothills of Mount Aragats. Mouth - River Sevuzh. The main attraction of the river - Kasahsky Canyon, located in the middle reaches of the river. It also houses several ancient monasteries.