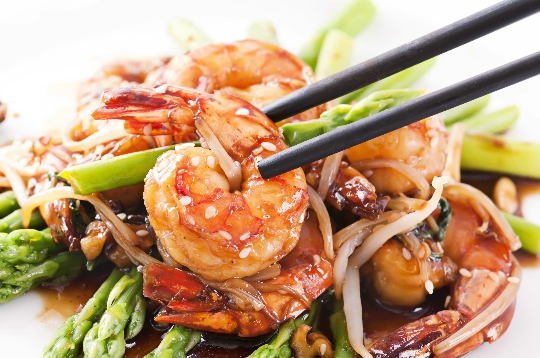 Asian Kitchen - a culinary habits of peoples living on the big continent of Asia (local cuisine is renowned for its exotic and variety).

Asian dishes are characterized by theiraroma and spice, and a key feature of this kitchen is the widespread rice dishes. For example, in India prefer long-grain basmati rice in Japan - round rice in Thailand - a long sticky jasmine rice. As additives often acts ginger, coconut milk, fish sauce, chili seasoning, curry paste. For example, in China, dishes seasoned with fennel, anise, Dittany, Szechuan pepper, and in Korea in almost all dishes are added roasted sesame seeds.

But to better understand what isAsian cuisine, it is advisable to consider the kitchen of individual countries. For example, in Japanese cuisine in the land premium, fish in batter ( "tempura") and skewers of seafood ( "kusiyaki") in Thai - "Tom Yam Kung" (a dish in the form of a sharp sweet-sour soup with chicken broth with fish and seafood) in China - Peking duck and pork in sweet and sour sauce, in Uzbekistan - pilaf.

Where to try Asian cuisine?

Wherever you are relaxed, it is unlikely that you havedifficulties in finding Asian restaurants - everywhere open restaurants where you can enjoy Japanese, Vietnamese, Thai, Indian and other cuisines.

In Bangkok you can eat in the "Eat Me" (hereGuests can enjoy a rolls of Parma ham and scallops; fruit garnish and seafood with Asian spices, prunes soaked in port wine), Vung Tau - in "Lan Run" (on the menu guests will find Asian and European cuisine, and recommended for tasting a dish of fried claws crab with cheese stuffing and gravy) Hong Kong - in the "T'ang Court" (in this restaurant recommended to try the crispy eel with lemon and honey sauce, and baked oysters).

Holiday-makers in Beijing will offer to go to a restaurant"Mama's Lunch Beijing", located near the Confucius Temple: here are held cooking classes for tourists - the chef will introduce them to the cuisine, revealing the secrets of preparing traditional dishes (Duration - 3 hours, and recorded on the course it is advisable to in advance by phone).

The trip to Asia can be timed to coincide with the Festival of seafood (Phuket, August), the festival of oysters in Tokyo (March), Festival of Food and Wine (Hong Kong, November).