Home>Articles on Australia>Articles on Sydney>Airport in Sydney diagram photo. How to get to Sydney Airport

Airport in Sydney diagram photo. How to get to Sydney Airport 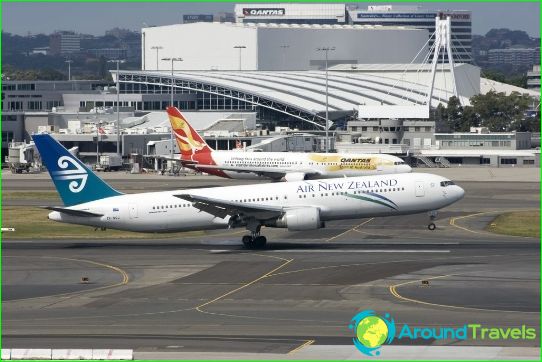 named Kingsford Smith Airport isthe largest city in Australia - Sydney. This airport is considered one of the oldest and largest airports in the world. Despite his age, the airport provides high-quality service organization through constant upgrades.
Every year served more than 32 million passengers and performed more than 300 thousand takeoffs and landings. Airport operates three runways, length 2529, 2438 and 3968 meters.
The airport is capable of handling all types of aircraft, including the largest aircraft in the world Airbus A380.
It is said that the airport does not send and does not receive flights from 11 pm to 6 am.

The terminals for passengers are available various services that you might need on the road.
Among the standard services are: cafes and restaurants, ATMs, post office, luggage storage, shops, etc.
For Business Class passengers have a superior room. For children there is a games room and a room mother and child.

It can be reached in several ways from the airport in Sydney:

In addition, companies operate at the airport, with car rental. Therefore, the city can be reached on their own.