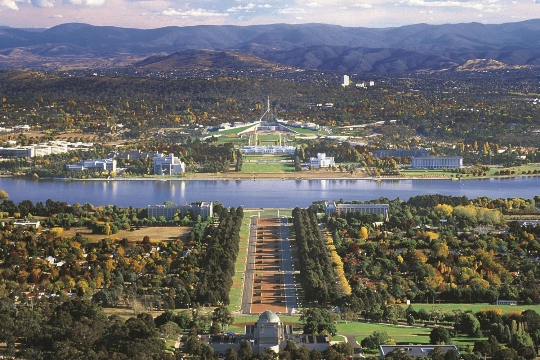 The capital of Australia - Canberra - is located on the shores of an artificial pond and is located between two Australian cities - Sydney and Melbourne.

The city was built with the aim of reconciling the tworivals, who have fought for the title of the nation's capital. To stop all the meaningless controversy, the government decided to build a completely new city, geographically located between two failed bidders.

a great number of projects have been proposed, but mostinteresting development Burley Griffin was recognized. Due to the fact that the project takes into account all the features of the local landscape, the city perfectly fit into the area and even became evident in the sample for Urban Planning textbooks.

Canberra performs a single role for whichshe was built - hence carried out throughout the country's administration. It is located on the territory of the Parliament House, the residence of the embassies of other countries and the headquarters of the different organizations. But the main offices of the largest monopoly companies, as before, are at the nodal industrial cities in Australia - Melbourne, Sydney and Perth.

Canberra - a small town, which you can get around in just a day. Yet even here there are places that are worth visiting. For example, a private zoo and aquarium, located in the western part of the lake.

"Questacon," science and technology center, interested students and travelers with children. Here there are the indigenous inhabitants of the country, and visiting tourists.

War Memorial in Canberra is the nationaland monument dedicated to soldiers who died or participated in wars. Memorial, in fact, represents a huge military museum of international renown.

Portrait Gallery in Canberra has gathered a huge collection of works by famous artists and international celebrities Australians.

Capital Hill is the center of the city and was chosen for the House of Parliament by the architect of the city.

The central part of Canberra offers visitorsspend time in restaurants and bars. Especially casino guests can tickle your nerves in a casino. Not too convenient that most of the restaurants and entertainment venues closed to visitors on Sundays. And remember that smoking in the territory of any institution is strictly prohibited.

If you have planned to take place in the capital a couple of days, then the choice of places to stay just huge. At your service and budget hotels, and luxury apartments.

Children's camps in the Irkutsk region in the summer. ...