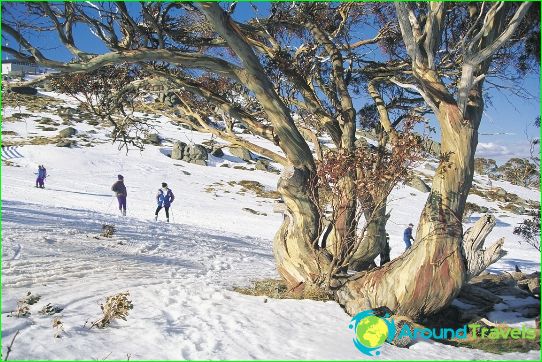 A whole continent and almost unexplored by Europeansworld - that's what Australia. This land for thousands of years has developed its own laws, but because there is so much special, not found anywhere else on the planet. Australia is located in several climatic zones and the immediate neighbors can be here deserts and tropical forests, snow-capped mountain peaks and valleys with warmer vineyards.
Any trip to Australia - in itselfadventure for Europeans. After all, it has to be provided not so much on the other side of the planet. Send here for sporting experiences and skiers to snowboarders, and the local mountains allow us to ride especially memorable and original. Season at many resorts green continent lasts the whole year, but the most comfortable conditions - from July to September.

One of the most popular in the country, this resortIt located in the state of New South Wales Snowy Mountains. It is considered the most mountainous: ski area begins here at an altitude of 2037 meters and ends at 1365 meters. Resort service 14 modern lifts, which bring the athletes to the start. Three of them - high-speed, so in Thredbo there are no queues. The longest descent starts at the top of Karels and continued for nearly six kilometers.
A total of 50 resort paved trails thatprepared not only for skiers but also for snowboarders, luge and freeride enthusiasts. Beginners and children can work out in the Wombat World and Easy Rider theme parks. Those who boldly refers to the average level of their, master slopes in parks Intermediate and Advanced park. And the most advanced prefer the route Crackenback Supertrail and Funnel Web. In their middle part it looks almost vertical, and the bumps and potholes make driving very extreme.
A distinctive feature of Thredbo - modernpiste equipment, trouble-free operation of all service systems, excellent quality of the snow, the insured snow cannons, and highly qualified instructors who can teach to ride a board or skis everyone.

Located in Perisher Valley, New SouthWales, this resort even against all other Australian perfectly prepared ski regions looks special. The highest level of equipment it leaves no doubt that the Perisher Blue is at the forefront of skiing green continent.
lifts Park is the largest in theGreen continent and includes 34 new units, which almost instantly deliver 52 thousand visitors per hour to the starting point of slopes. It is at this resort the most extensive ski area, located at a height - from 1600 to 2050 meters. Truss laid in the region, enough for everyone. Of the 59 runs for one fifth is for green and pro-extreme, and all the rest - for athletes average level of preparedness.
Dosochnikov aspire to this resort for severalreasons. Chief among them - a great halfpipe, boardercross unlimited possibilities to do, good-equipped fun park with different shapes to practice somersaults and a desire to drive at night under artificial lighting. By the way, the local half-pipe designed by American professionals and has a slope of 12 degrees at 100-meter length and 18 meter width. The height of the trough - four meters.
The only disadvantage of the resort - the price. Expensive everything here - from accommodation to equipment rental. Ski pass for the day costs about $ 140 for five days - about 500 dollars. To stay directly in Perisher Blue will cost not less than $ 500, so all prefer to settle in the town, located an hour's drive from the resort.

This ski area is officially in AustraliaI recognized as the best in the country over the past decade. He has a history of 50 years of the twentieth century, when the first athletes began to explore its slopes. Today Buller takes a year to 300 thousand Boarders and skiers from all over the world and is one of the leading on a green continent.
Buller is located in Victoria in the mountain rangeDelatite at an altitude of 1390 to 1790 meters. It is equipped with 62 tracks, a third of which is marked in black and is suitable for fans of speed and adrenaline. Newcomers also have a place to practice the technique - 15 tracks of varying length are given for the most inexperienced. 27 ski lifts, of which 8 - chairlifts, serve athletes with a capacity of up to 40 thousand people per hour.
For snowboarders the resort is equipped with a half-pipe andsnowpark with a ramp. For those who only plans to learn to stand on the board recommends that its Buller ski instructors. The local school - one of the strongest in the country, and snowboarding competitions held on the local tracks - the card of the region.
Prices for ski passes are about $ 75 for a day of skiing. During the five days will have to pay 220 dollars.

Bus tours to the Czech Republic. The cost of bus tours ...

How to fly from Manila to Moscow? Time ...