Airport Vienna - Vienna-Schwechat: diagram photo. How to get to Vienna Airport 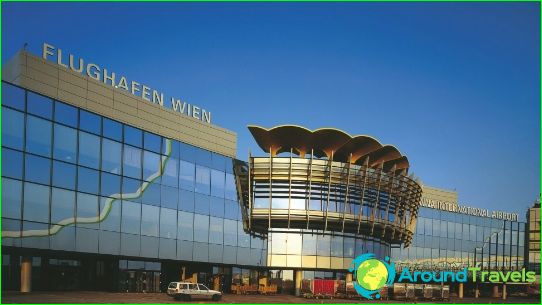 The only airport in Vienna - Vienna-Schwechat(German - Flughafen Wien-Schwechat), another name - Vienna International Airport. It is located in the south-east of Vienna, in 18 kilometers. Vienna-Schwechat is known as the busiest airport of Austria. The closest town to the airport - Schwechat, after whom the airport is named.

To the airport attributed to Austrian AirlinesAirlines, as well as its affiliates, and by Niki airline, carrying out low-cost flights. Interestingly, in 2008, recognized as the best airport in Europe according to the World Airport Awards.
Now these terminals operate at the airport: 1, 1A and 2 - the last one was created specifically to serve low-cost flights. The first terminal is served by Emirates, Star Alliance (and the company partners) and Austrian Airlines. The second terminal is working with companies Qatar Airways, Sky Europe, British Airways, Air France, Iberia and many others. As for the terminal 1A, it is, as mentioned, serves the low-cost companies: Germanwings, Air Berlin, Niki, and others.

It should be noted that, instead of flying inVienna, many people prefer to Bratislava, Budapest or Prague, and from these cities to get to Vienna by bus, because the flights to the capital of Austria often are expensive. However, difficult to identify other significant disadvantages airport. Passengers are offered the following services: free Wi-fi, lockers, currency exchange offices and banks, medical center, conference and business lounge, VIP-hall, tourist companies, as well as a chapel and of course, restaurants and shops. In addition, the hotel NH Vienna Airport (5 stars) is located right next to the airport. The hotel features gyms, bars, restaurants, as well as health treatments and babysitting services for children.

To get to the center of Vienna is possible by the followingways. The most convenient, but also the most expensive - a taxi, which costs about 40 euros. In addition, the airport belongs to the high-speed train City Airport Train, which in 16 minutes arrives to the station Wien Mitte. Powered train with 6.05 on 23.35, a one-way fare is 9 euros, while children under 14 years of age may travel free when one adult traveling with them. If you booked on the internet or have a Vienna Card, then the purchase will come out a small discount - 1-1.5 euro. Moreover, if you purchase tickets from a conductor, it will cost them more expensive than at the box office.

Another way to get to Vienna - ShuttleVienna-Airport-Service (it is better to order on the internet) and bus Vienna Airport Lines, which runs every half hour from 6 am to midnight. The trip costs 6 euros, a discount if there Vienna Card. Depending on the desired stop you can spend in transit from 20 to 60 minutes. If you do not want to splurge on a trip, use the train S-Bahn (Schnellzug), which runs every hour to the station Wien Mitte. The price of one trip to the checkout - 4.40 euros, and in the machine - the euro cheaper.