Vienna 3 days: where to go in Vienna 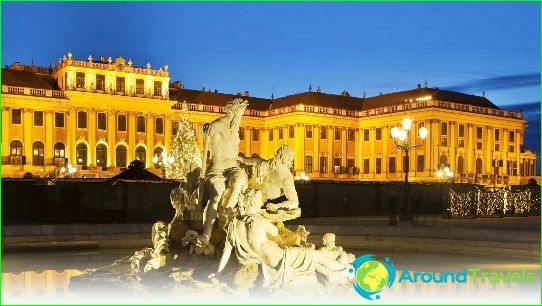 Caught in the Austrian capital, audiophilesflock to the Vienna State Opera, the dream sweet tooth taste cake "Sacher", washed down with a fragrant Viennese coffee and architectural landmarks of fans buy a city map and start to look for her the most important sights, of which there are photos in the album, every self-respecting traveler. All the pleasures it is possible to combine the project "Vienna for 3 days", there may remain on time and pleasant shopping experience, because for fashionistas in the Austrian capital all conditions.

Respected organizations have long contributed sights of Vienna in its honorable list, according to which all the old quarters of the Austrian capital protected as a unique cultural heritage.
One of the most important architectural masterpieces,Built in the early 18th century in baroque style - the Schönbrunn Palace. This is the summer residence of the monarchs of Habsburg, which was built in the western part of the city. The main attractions of the palace - park with fountains and statues, made the best sculptors in Europe at that time, psevdorimskie ruins and the local zoo, by fate turned the oldest in Europe.
Former imperial menagerie worthy of inclusion inprogram "Vienna for 3 days" as a separate item. It was founded in the middle of the XVIII century and the main construction of the zoo was the pavilion for breakfast. On all sides of the rotunda diverge like the rays of thirteen enclosures. At the behest of the emperor in and familiarity with the exotic animals were free to all comers. Today, the most visited and loved residents of giant pandas became Schönbrunn Zoo.

Everything in the garden!

Not less popular for walking Laynts Zoo. It remains of the famous Vienna Woods, is now organized as a protected area. Here you can meet wild animals living in the wild.
Meet and marine life in Vienna for3 days quite possible, despite the fact that the city is separated from any seas far enough. For excursions along the bottom of the Sea will have to visit the sea House, built in a military anti-aircraft tower. Construction remained since the Second World War, and modern aquaria within its walls contained and presented the audience more than 10 thousand sea creatures of various kinds.
No less interesting for fans of natureare the Botanical Garden and the University of Vienna's Prater public park, after walking on which so pleasant to visit one of the legendary Viennese pastry and enjoy tasting strudel or cappuccino.

Activities in Lithuania in April: the prices and ...