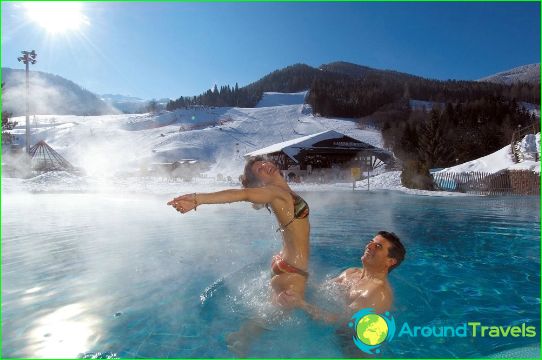 Carinthia, the most southern federal state of Austria,It has long established itself in the circles of fans of ski holidays a combination of its perfectly groomed slopes, hot springs and beautiful Carinthian wines. The largest ski resorts of Bad Kleinkirchheim and Nassfeld occupy in the Austrian winter tourism place of honor on par with the popular resorts Zaltsburgerlanda and Tyrol.
You can get to Bad Kleinkirchheim on the TauernA10 motorway from Salzburg Airport takes no more than 2 hours - literally on the doorstep. The first tourists probably spent this much longer - in Bad Kleinkirchheim came "on the water" in the XI century. The resort was already a well-known holiday destination, although the Roman Empire knew about it earlier. In 1492, a number of hot springs and built the first chapel was opened. Later, around 1670, the wooden water conduits began to come in a specially equipped bath, called Saint Catherine terms. The chapel was rebuilt and preserved to this day.
Of course now the main magnet for tourists,who come to Bad Kleinkirchheim in winter, are not the only terms and including 103 km of prepared pistes and 25 modern lifts. The highest point of the entire region - the Kaiserburg mountain (2055 m), from here the route leads to the town center and the finish almost in the outdoor pool, thermal spa "Römerbad". By the way, the slogan of Bad Kleinkirchheim and sounds so: "Skiing or terms You always have a choice." Although some may be an option if the local ski area impresses with slopes of 3-4 thousand meters with a height difference of more than 800 meters, and most of the tracks -. 77 km - "red", ie medium difficulty?
However, there is also the route for beginners - theya length of 18 km, they are mainly located in the Mount Pridrёf (1963 m), but there are "black" downhill - at the top of the Kaiserburg, and the trail of Franz Klammer, named after the Olympic champion in 1976.
In addition to breathtaking descents from the surroundingslopes and swimming in the baths resort of Bad Kleinkirchheim can offer all known types of winter activities: cross-country skiing, hiking trails, tobogganing on the highway Rodelban, horseback riding and dog sledding, as well as the rest "after-ski" in the many mountain restaurants and bars, and etc. One of these "points of public catering" is the restaurant "Rossalmhyutte", located directly on one of the tracks from the Kaiserburg. Here, as in many other places, serving traditional dish called Frigga - fried potatoes with bacon, egg and cheese filled. At the end of a busy day and productive of riding Frigga perfectly satisfies hunger. However, none of the Austrian cuisine will not allow to quench the thirst of riding from the mountains - recipes for this has not yet been invented.
This season, the guests of the resort waiting for quiteexotic novelty - Sauna Thermen Cube, located right on one of the ski slopes in the ski area St.Osvalda. Externally, the sauna looks like a glazed cube located inside the infra-red cabin with air fresheners. From the cockpit will be a direct relationship with the expert of one of the two thermal baths of Bad Kleinkirchheim, which is able to give some valuable tips or write a massage.
In addition, for those who do not want to waitvisit a massage parlor in the valley, on one of the slopes of Mount Pridrёf be installed cabin with two massage chairs. According to the administration of the resort, this "trick" will help to quickly restore power to those who are tired of the constant "plowing" on the ski slopes. In addition to the sauna, the local ski area will be four snow-lounge, set in the best vantage point of the entire region.
Do not lag behind the hosts slopes of Bad Kleinkirchheim andowners of local hotels. For example hotel "Kirhhaymer Hof" spent 1.2 mln. Euro for the resettlement of new family suites, in which children will have their own sleeping area called Murmelbau (Mink for Groundhog). Each suite will receive its own name - the name the mountain or ski slopes. Finishing suites made of cedar wood, which, according to recent studies, has beneficial effects on cardiac function during sleep. In addition to family suites, the hotel will also "themed" hotel room "All of the Franz Klammer", which will be equipped with original accessories in the form of photographs, this ski Franz Kaiser, and casts his hands. The room will appeal to fans of ski idol.
If we are talking about the legends of skisport, it is impossible not to mention the big sports, who will visit Bad Kleinkirchheim on 10-11 January 2015. It was at this time there will be a race of one of the stages of the World Cup in Alpine skiing - women compete set of awards in competitions in downhill and super-G. As always, under the stage, resort guests expect discos, performances by local pop stars and sea hot glyuvayna.
***
And spend in this wonderful placeposlenovogodnie vacation tour operator can help you TezTur. Yes, and with a direct flight from Moscow to Salzburg, where the resorts doorstep. Dates of departure - 03.01.2015 and 10.01.2015.
More ...

Moscow Flag photo, history, the value of the flag colors ...