Home>Articles about Austria>Austrian Flag photo, history, the value of the state flag colors of Austria

Austrian Flag photo, history, the value of the state flag colors of Austria 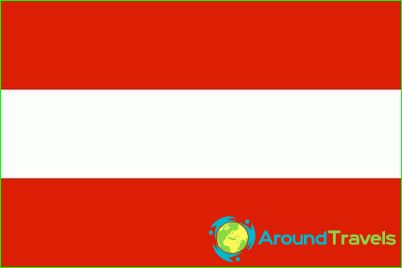 Flag of Austria - the country's national symbol isrectangular in shape, coloring it deserves special attention. It has three horizontal stripes. The upper and lower bands of red color, and between them the band of white.
This coloring is not accidental. The upper and lower bands of red color symbolizes the blood that spilled the real patriots of the country, leading an active struggle for life of freedom and independence of the Republic of Austria. white band symbolizes the freedom that the people of Austria won the brave. In addition, the white bar indicates that the monarchy overthrown in the country.
Such an interpretation of the colors of the flag of Austria does notIt is the official version. In addition to this version, there is the official value of colors of the Austrian flag. Thus, the strip of white color symbolizes the Danube River, which crosses the entire territory of Austria from east to west. There is even a legend occurrence flag. It is said that the flag was invented by Duke Leopold V of Austria after one of the Crusades. According to legend, during the battle the Duke wore a snow-white form. But as a result of a fierce battle held at Ptolemazine, the whole form was smeared with blood. And only on the spot where the Duke was a belt, he remained white stripe. Blood is not penetrated by him. Apparently too impressed Duke is a combination of colors that inventing a flag, he used just such a coloring.
As you can see, this flag colors appeared morelong before the overthrow of the monarchy rule in Austria and, of course, before the start of the Austrian people struggle for an independent existence. But these versions of the interpretation of the flag values ​​are the most common in our time.
Noteworthy also is the fact that the flag of AustriaIt is the oldest flag of Europe. The same age is only one flag - the flag of Denmark. The national symbol of Austria passed a difficult way to its official recognition and steadfast. At first it took. It was 1919. Then it was decided to cancel it. This event occurred in 1938. The national flag of the flag again restored in 1945.
There is no indication in the law on which the ratiothe parties should be at the flag, so you can meet Austrian flag of different lengths and widths. But traditionally considered to be the ratio of 2: 3. The main thing is that the strips are of equal width.

Kitchen Tajikistan: photos, dishes and recipes of the national ...