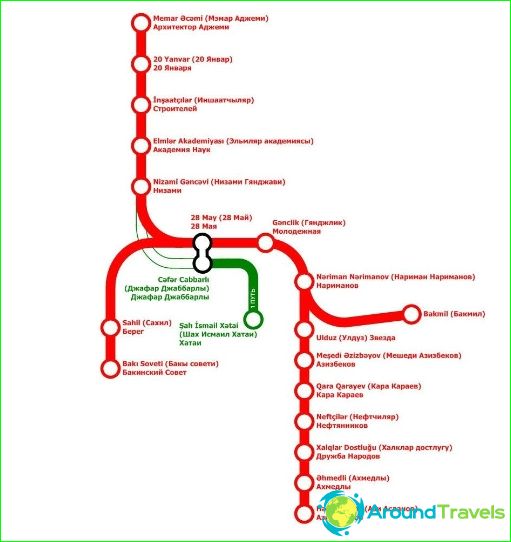 Metropolitan was the capital of Azerbaijaninaugurated on November 6, 1967. The State Commission was in a hurry to adopt the draft on the eve of a round anniversary of the October Revolution, but the passengers began to take place on November 25. Today, the total length of its lines is 34.5 km. The scheme of Baku Metro has two lines: red and green, and 23 stations. Of all the stations only "Bakmil" is land, the rest are located underground. Seven stations are structures deep foundations. Passenger traffic is not less than 560 thousand people a day.
History of the Baku subway building goes30 years of the last century. Even then, the master plan of the capital of Azerbaijan called for the construction of the subway, but the official start of work on the project was given only in 1949 in the USSR Council of Ministers decree.
Technical project approved in the first phase1951, but the changes in the political arena have led to the preservation of building. Reanimate the metro project only managed to in 1960, and the first cars for the needs of the subway began to arrive in Baku in the summer of 1967.
All announcements and information signs inBaku metro made in the Azerbaijani language. The route of the train indicated on the light boards in the head and the tail of the train. Photographing in the Baku Metro is officially banned, when 289 people died in a fire after the terrorist attack in 1995. Today, the subway is the capital of Azerbaijan, perhaps, the greatest number of police officers compared to the subway the other cities in the world.

Met opens in Azerbaijan's capital for6.00 passengers enter the daily. Closing stations occurs at midnight. The peak interval metro trains movement is about two minutes, other times it can take up to 10 minutes. Trains from the branch at the station "Nariman Narimanov" to "Bakmil" stations follow roughly every half hour.

Tickets for the Baku Metro

prezda Cost of Baku Metro has alwaysIt was one of the lowest in the world. Compared with the Moscow subway ticket price differed seven times. On March 1, 2011, the cost of one trip - 0.20 manat. The exchange rate is about 1.27 US dollars for 1 manat. The fare made using plastic cards that should be loaded with cash in the lobbies of stations. Upload accept coins and banknotes nominal value of 10 cents to 20 manat. The collateral value of the card is AZN 2, which can be returned when you return the card to the cashier any of the metro stations.

Bus tours to Norway. The cost of bus tours ...