Culture of Azerbaijan: traditions and characteristics 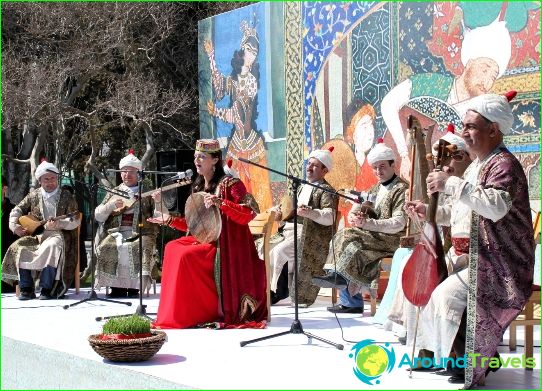 Located at the historic crossroads of Eastand West, Azerbaijan has for centuries absorbed the traditions and customs of the surrounding nations, especially since the country has always lived representatives of many nationalities. History of the state was full of different political and historical turmoil, which could not be reflected in the bright and original culture of Azerbaijan.

Old buildings on the territory of modernAzerbaijan are numerous. The earliest villages located in Qom and Lekit. This ancient temples, built no later than the V century, related to the architectural monuments of Caucasian Albania. The capital also has a wonderful architectural sample of culture of Azerbaijan - the Maiden Tower. Fortress building in its present form was built in the XII century on the site of an ancient building dating back to the VI century BC The tower was never captured by any of the attackers on the Baku enemies, and its outlines are the hallmark of the old part of the city.
Islam as the main religion, professedAzerbaijani people, brought their own characteristics in the architectural appearance of the country. The most famous and ancient mosques are considered to be building in the city of Agsu, dating back to VIII century, and a relic of national architecture in Shamakhi. The local Juma Mosque was built in the middle of the VIII century and is one of the earliest in the Caucasus.

One of the most recognizable symbols of Azerbaijanconsidered and its magnificent hand-made carpets. Carpet weaving - as much a part of Azerbaijani culture as music, literature or painting. It carpets woven in Baku, Shirvan and Karabakh, considered the real Caucasus, and the historical realities of Azerbaijan to the researchers called the birthplace of Russian Caucasian woven masterpieces.
UNESCO, the Organization has made artAzerbaijani carpet weaving in the list of intangible cultural heritage, and the work of local masters have repeatedly won top places in competitions and exhibitions of world importance. Antique rugs can be seen in museums in Baku and Karabakh, and the product of contemporary art - buy in any city of Azerbaijan.

Azerbaijan's Culture for many - it and itsdances, which are expressed in the best feelings and reveals the soul of the people. Local dancing can be slow or fast, smooth or incendiary solo or collective, but they are invariable sincerity of the performers and their professional excellence. That's why tourists special demand for tickets to performances of dance groups in Azerbaijan.

The currency in Iceland: the exchange, importation, money. What ...

Holidays in the UK in August: prices and ...