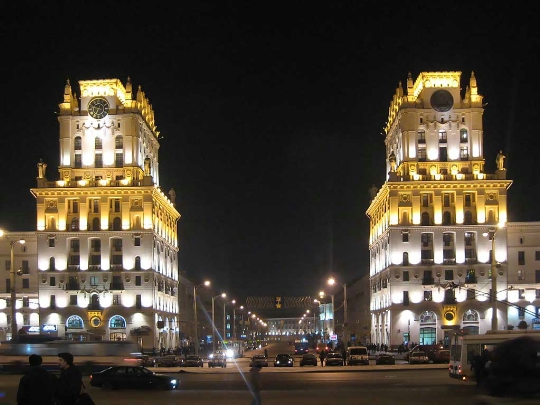 Minsk - Belarus is the main town, and its capitalindependent administrative unit. The city has a special status and is the title of the Hero City. Streets of Minsk have a complex and long history. They have changed along with the city, which at various times was subject Petersburg, Warsaw, Moscow.

Today Minsk is the largest political, cultural and economic center of Belarus. It occupies the tenth place in Europe in terms of population.

The capital of the independent state of Belarusbeautiful city began only in the early 90s. With its streets disappeared many historical attractions. Re Minsk was rebuilt after the war. Its present appearance was formed in the mid-20th century. The streets had different names and were renamed several times. These include the Castle, Cancer, Red, Puteynaya, meadows and other streets, as well as the Jubilee area. Vintage lanes are solid, Mountain, barracks, St. Michael, and others.

Currently, the total number of Minsk streetsis 1290, including alleys and avenues. Urban sprawl has been formed in the middle of the last century, the Soviet Union period. Socialist appearance of many buildings harmoniously look at the background of the urban landscape.

The visiting card of Belarus considered the prospectIndependence is located in Minsk. Walking through this historic place, few people think about his appearance. Prospect originated in the XVI century and renamed several times. During the war, the Germans designated this street as Haupshtrasse. In the Soviet years on the site of the famous street it was laid down the main avenue of Minsk, where today is located the majestic buildings. In 1952 he wore the name of Stalin, and later - Leningradsky Prospekt. In 2005, it became known as Independence Avenue. He is the principal of the Minsk highway, which crosses the city and goes from the center to the north-east direction.
Prospect has a length of about 15 km.

Attractions in Minsk Oktyabrskaya consideredarea. Here is the Palace of the Republic - a famous Belarusian attraction. President Alexander Residence stretches in the park. Other popular points of the city - the Victory Square, where the circus, as well as a children's Gorky Park.

Historical objects famous street Nemiganamed after the local river. During heavy rains Nemiga is flooded. Top city designated the area from the street of Cyril and Methodius to Herzen. In this place preserved buildings dating back to the 19th century.