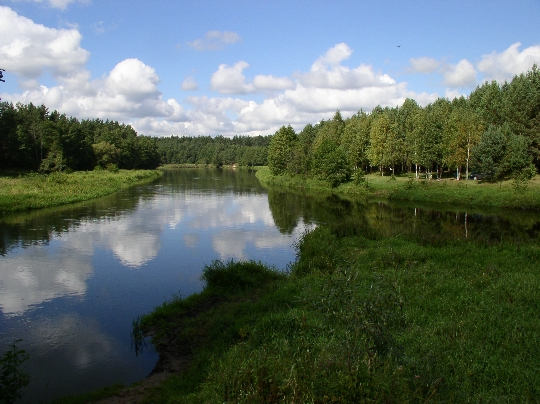 Map of the country is quite riddled with thin blue lines. Belarus Rivers are represented as real giants such as the Dnieper, and cozy "home" rivulets.

Dnepr - one of the major waterways throughoutEurope. The river passes through the territory of three countries: Russia, Belarus and Ukraine. The name of the river has received from the Sarmatians, who called her Dana Apara ( "the river on the other side"). The Persians called Dnepr Danapris, is already much closer to the modern name of the river.

more than 70 species inhabit the waters of the Dnieperfish. In the lower river for much richer - is home to nearly 65 species. The most common carp. There are herring, sturgeon, roach. For the upper Dnieper typical: sturgeon; chub; ide; lake bream; pike; catfish; carp; roach; perch. In the Dnieper River and you can also catch crayfish.

This is one of the major Eastern European river. The source is located on the territory of Belarus, hereinafter Neman sent to Lithuania and the Baltic Sea. Neman occupies fourteenth place in the list of major rivers in Europe, and it is the third-longest river in Belarus. The bed of the Neman river is navigable for the most part.

The river is named after the god of the Baltic mythology- Neman. Total river is about 150 strong inflows. Neman Delta is a water maze and is popular among lovers of ecological tourism.

SOG - a major tributary of the Dnieper River flowing throughBelarus, Russia and the border with Ukraine. The river is known for its clear waters and is considered to be the purest in Europe. SOG has a rather meandering riverbed enclosed in asymmetric shore.

Translated SOG sounds like a "wolf." Where it went historians such an unusual name is unknown, but it is assumed that the "perpetrators" - numerous forests located not Sozh shores. On the banks of the river are many famous places: Veprinskaya oak forest; Dobruš spruce; Botanical Gardens (resort); Dendrological park.

Western Dvina River - the river of three countries: Russia, Belarus and Latvia. Once I had a message from the Berezina and the Dnieper through the artificial canal (now not in use).

At the river quite a few names - the Dyna - Dzvіna -Dźwina-Tung - Dvina, Vina-Väinä - but they all about the same translation - "a passage to the sea." The first mention of the Western Dvina is in the ancient sagas of the Vikings.