Flag of Belgium: photos, history, the value of the state flag colors of Belgium 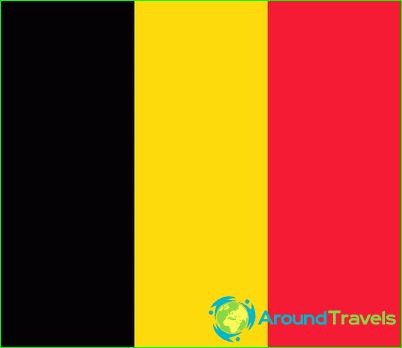 Flag of Belgium as an indispensable symbol of the KingdomBelgium is a rectangular cloth, which the parties formally relate to each other in a ratio of 13:15. For civilian use made of cloth proportion of 2: 3, which does not contradict the Constitution. Above the Royal Palace in Brussels Flag has an aspect ratio of 4: 3, which is associated with the peculiarities of spatial perspective. Such dimensions allow, according to the Belgians, the most aesthetic appearance of a national symbol for looking at him people.

Civil state flag of Belgium isof three vertical strips of equal width. Starting from the shaft, the band alternates in the following order: black, gold and red. His appearance was adopted in 1831 after the Belgian Revolution, during which the southern provinces seceded from the United Kingdom of the Netherlands. Thus was formed the Kingdom of Belgium, and over it was first raised a new flag. His colors are repeated a panel of color, under which the revolutionaries were in Brabant in 1798. Then, the first attempt was made to get rid of Austrian rule and declare an independent state. United States of Belgium lasted less than a year, but the precedent had a significant influence on the development of this region in the future.

Brabant Flag revolt had horizontalthe orientation of the strips, the bottom was the first gold, then black and red. January 23, 1831 decree of the Provisional Government was formalized vertical arrangement of stripes on the flag of the flag, and two weeks later he became the subject of the article of the Constitution of the State.

State government flagkingdom repeats civilian with the only difference being that on a gold background depicts a crown and lion resting on its hind legs. This flag as the state approved in 1950, whereas previously it was a symbol of the Navy of Belgium.

Today the fleet is represented by a white cloth,intersected St Andrew's cross. At the top of the flag - the crown and crossed guns, made in black, from the bottom - the ship's anchor. The proportions of the military character of the state are different from civil and are 3: 2.

The flag of the Kingdom of Belgium should be raised on public buildings in most public holidays.

What to bring to the Czech Republic. What kind of things and ...