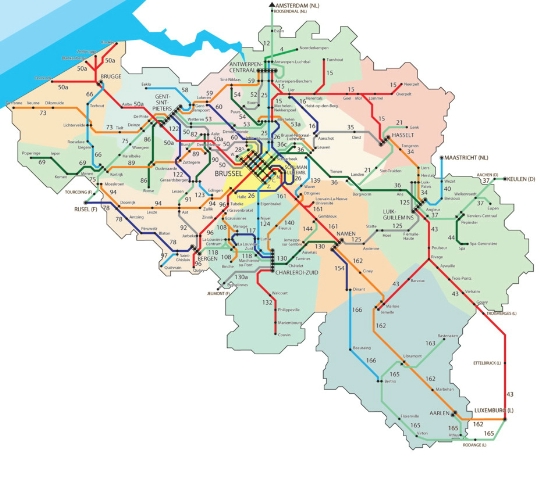 The dense and extensive rail network covers Belgium. F / A message is operated by SNCB, which supports an intensive pace of passenger traffic.

Belgian Railways converge in the main pointcountry - Brussels. This city is considered the main railway hub of the state. The entire Belgian territory can be crossed in three hours. In Brussels, there are three main stations through which are almost all trains: Brussel Zuid or the main station, Brussel Nord and Brussel Centraal.

What trains run in Belgium

Swift trains type IR and ICperform the lion's share of long-distance flights. Type R Trains engaged regional transportation. They ply between major cities and towns, carrying a lot of stops. Night trains in Belgium do not go. The railways of the country stretches for 3233 km. Trains are considered to be the most comfortable way to travel through its territory. Spending just 40 minutes, the passengers get to Brussels, Antwerp, 30 minutes - to Ghent. The train runs on schedule, and feature low noise and comfort. To all the great cities of suitable fast trains, which travel at very cheap cost.

Belgium carries out a significant part of the Europeantransport interchange. From the capital, can be reached by train in the Netherlands, France, UK and Germany. The head node between other states and cities - South Station Brussels. It is a small railway station with excellent infrastructure.

Prices of railway tickets in Belgiumconsidered moderate, given the Western European standards. From Brussels to Antwerp can be reached in 48 minutes by paying the fare 7.5 euro (second class) and EUR 11.5 (first class). Purchase tickets in advance does not affect its value. Tourists who are going to travel the country, recommended tickets Evrodomino. Its cost is 46 euros, and the expiration date is three days. Pensioners and students are provided with discounts for travel on the train. To increase the popularity of the railways, the Belgian Government is sponsoring w / d sphere.

The trains are local routesconventional, intercity and interregional. Ticket prices depend on the length of the path. Passengers are offered discounted rates. The ticket price can be calculated beforehand, referring to the site of the National Company of Belgium Railways - www.b-rail.be. it is recommended to book in advance for a trip to another country w / tickets to save money.