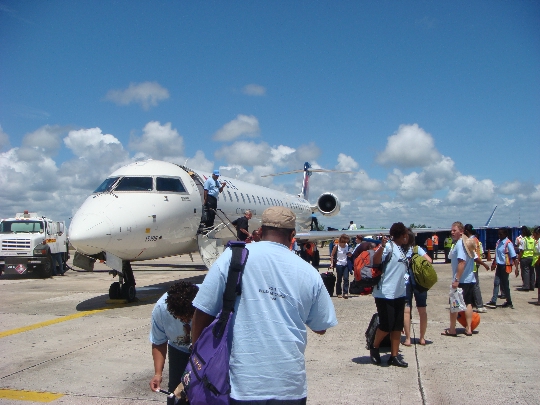 A small country in Central America hasgreat authority among divers, thanks to the barrier coral reef and the famous Great Blue Hole - an ideal dive site for those who consider themselves professional. Airports in Belize are very popular among tourists - the roads here are not in perfect condition.

The only air harbor of the country, which hasinternational status, is located in Belize City. The city where the airport is located, - the capital of the country on the Caribbean coast in the eastern part of the state.
Airport Philip S. W. Goldson Internetional and the center of Belize City is separated 15 km, which is best overcome by taxi. For shuttle bus will have to stock up on time - public transport in the country does not have a regular schedule and serves passengers of delays and disruptions.
You can see the sides of different airlines at the international airport of Belize:

Registration of passengers and baggage on international flights at the airport Philip S. W. Goldson Internetional begins two and a half hours before departure. Standard safety and inspection rules.
Belize Airport can not boast of too advanced and modern infrastructure, but to the needs of passengers it has a café, a small area of ​​free trade, and currency exchange.
All information about the schedule of flights is available on the official website - www.pgiabelize.com.

2 km north of the city center is the airportBelize, serving local airlines. With easy access to the most remote corners of the country, Guatemala City and some Mexican resorts - Cancun, for example.
A small airport in the city of Plasencia onsouth-east of the country is located in the zone of Belize beaches. These planes fly local airlines Tropic Air, delivering tourists to places for recreation in hotels in Belize.
Details on the website - www.theplacencia.com
Only domestic flights serving the airportSilver Creek. The passenger terminal is located far enough away from the city and about 80 km will have to overcome a taxi or book a transfer from the hotel. For check-in is sufficient to arrive at the Belize airport two hours before departure time.

The coast of North America: a photo, a description of

UAE population. The population in the UAE: features, ...