Home>Articles about Bermuda>Flag of Bermuda: photos, history, meaning of colors of the national flag of Bermuda

Articles about Bermuda
by aroundtravels 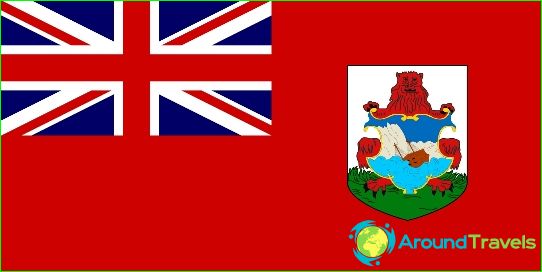 The latest version of the flag overseas territory of Bermuda was adopted as an official in 1999.

Description and proportions of the flag of Bermuda

The flag of Bermuda hasclassical rectangular, and its sides are related in the ratio 1: 2. It is approved for use by citizens of the country and its officials and government organizations for all purposes on land. On the water, the flag of Bermuda is allowed to raise to private vessels and merchant marine ships.
The main field of the flag of Bermuda -bright red. In the upper left side, equal to a quarter of the total area of ​​the rectangle located British image flag. On the right side of the cloth is applied to the coat of arms of Bermuda.
Coat of arms of Bermuda has a classic shapeheraldic shield and depicts a red lion holding a shield in front paws bizarre. The shield against the blue sky in the white foam of the waves dying ship, symbolizing the frigate "Sea luck", which passengers safely rescued on the islands and established the first settlement. Leo red color - is the UK holding in the paws of your own possession. Below the coat of arms of Bermuda is inscribed the motto of the country, which states "Where will bring good luck."

The history of the flag of Bermuda

Bermuda since the beginning of the XVII century wereterritory for the English colonists. In 1684, they officially announced the possession of the British crown, and the flag of Bermuda in the early twentieth century was the cloth, typical of all colonies of Great Britain. At the top of his quarter near the staff fit into the British flag, and was located in the right half of the coat of arms of the colony. The difference of the flag of Bermuda by panels of other colonial subjects lay in the fact that the flag had a red box, not blue.
Flag of Bermuda during hisexistence subjected to minor changes, which were not always visible to the casual observer. They concerned the hue of the general field of the flag, and some details on the arms of the state. The final and latest version of the flag of Bermuda, used up to now, has been adopted in 1999 and approved by Her Majesty, which continues to be the Queen of the United Kingdom and all its overseas possessions. Municipality received Bermuda in 1968, it refers only to the country's domestic affairs.

Holidays in Austria in December: the prices and ...