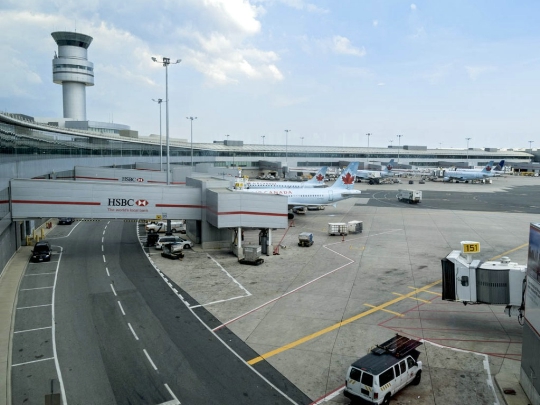 Difficult terrain, adverse climate and abundanceinaccessible areas played an important role in the development of Canadian civil aviation. Of the dozens of airports Canada Russian tourists are interested in air harbor large cities, where the planes fly straight from Moscow and arranged connecting flights with transfers in Europe.

Among the international air harbors of the busiest and popular name the following:

The capital city of Canada, Ottawa has its ownAirport, which is called the MacDonald-Cartier. From its business center is separated 10 km, as well as a means to transfer tourists prefer the N97 bus, next to the city for the selected band.
In Canada's Capital Airport fly planeslocal airlines Air Canada from the US, Mexico and performed domestic flights. Greater international importance, this air harbor does not, but wishing to use its services can be found all the necessary information on the site - www.ottawa-airport.ca.

In the first place in importance and among the busiest airports in Canada is Toronto Pearson, capable of serving more than 38 million annually. Man.
It is located 22 km north-west ofmetropolis and transfer passengers involved taxi drivers, limousine service and class "express" bus, delivering passengers to the city in just half an hour. In addition, you can go to Toronto on trains from Terminal 1 and 3.
"Aeroflot" flies in the Canadian airport on Wednesday,Fridays and Sundays, travel time is 10 hours. On other days of the week the Russian travelers will be easy to get to Canada flights Air France, Alitalia, British Airways, KLM and Turkish Airlines.
While waiting for departure, passengers can make purchases in duty free shops, dine in the café, charge mobile phones and free wireless internet.
Airport Website - www.gtaa.com.

How to fly from Khanty-Mansiysk to Moscow? Time ...