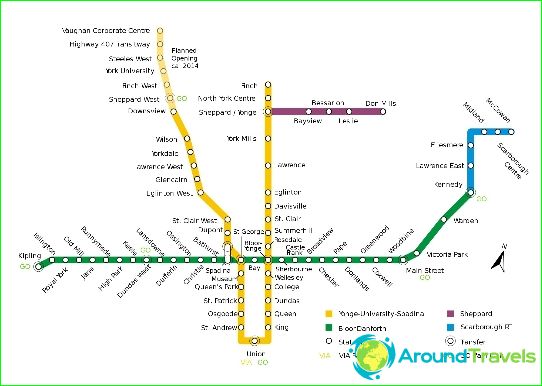 Metro Toronto was opened March 30, 1954. It was a line of Yonge-University-Spadina 7,5 km long. Currently Toronto subway lines 4 consists of 80 stations. The total length of 71.3 km of tracks. Metro is integrated into the overall transport system of the city, consisting of the 4 metro lines, 11 tram lines and 140 bus routes.

One of the lines (blue) length of 6.4 km refers to the Skytrain, it consists of 6 stations and serves as an extension of the Green Line Bloor and Danforth.

Line Bloor and Danforth (green) runs from west to east of the city under the Bloor Street.

Line Yonge-Spadina-University (yellow) has a horseshoe-shaped (U-shaped) appearance. Both its branches directed to the north, and the base station to the Union is at the center of the city.

Sheppard line (purple) - the shortest in the Toronto subway. It passes under the Sheppard Street. In the near future it is planned to expand to Scarborough station planned light-rail.

In addition, by 2016, we have finished work on the commissioning of the new northern branch, which serves a suburb of the city of Toronto Vaughan.

Metro Toronto runs from 6:00 am to 1:30 am. Weekends: 9:00 am to 1:30 am. During holidays, introduced a special timetable. From Monday to Saturday, the interval of trains is 2-3 minutes during peak hours, at other times trains run every 5 minutes.

For fare used in the Metro Torontosingle tickets, tokens and vouchers, which are sold at ticket offices and machines in metro stations. Benefits for travel apply to children aged 2 to 12 years, pensioners and students. For children under two years old travel free.

Benin Capital: card photo. What is the capital city in ...

Christmas in Switzerland, traditions, photo. As the ...