Home>Articles on Canada>Articles on Toronto>Streets of Toronto - photo, name. List of famous streets in Toronto 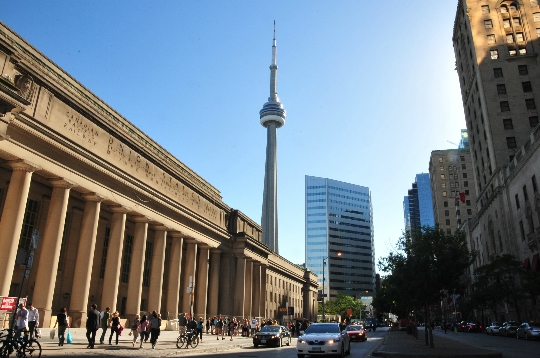 Canadian metropolis of Toronto is different saturatedcultural and business life. Every year it attracts a huge number of travelers. Toronto Street have interesting architectural appearance. Construction of new buildings is accompanied by a reconstruction of the old ones.

About twenty years ago, Toronto was connectedand its suburbs:. Mississauga, Oshawa, Etobicoke, etc. Currently, Greater Toronto Area occupies a significant portion of Northwestern Ontario shore. Canadian Mail Street - the area of ​​urban development, which comes from Quebec to Windsor. The streets of Toronto are along the lake, crossing each other at right angles. city ​​project was created in 1793 by military engineers.

The appearance of the city center is original because of the abundance of small buildings. Older homes can not be counted among the masterpieces of architecture. For the central part of Toronto is characterized by a motley mix of styles and advertising.

This is the main city street, the lengthwhich is about 1800 km. It was formerly known as the longest street in the world, and recorded in the Guinness Book of Records. Yonge Street features several restaurants, clubs, boutiques, theaters and shops, as well as the wide sidewalks.

The main street of Toronto begins at the waterfrontOntario and divides the city into two parts. It goes in the direction of Cochrane and comes to the border with Minnesota. Yonge Street is a busy street, along which are threads underground.

There is a business center of the country. On the street Bay located central offices of many companies and banks. The street runs along the southern part of Toronto. The name of highway received through the Gulf of Toronto, where it begins. Earlier this place was inhabited by farmers and lived wild animals. In the 19th century it was chosen by Bay Street financial firm.

Business life is boiling at the intersection of Bay andKing. Today, in this place work offices, law firms and exchanges. Here are concentrated the city skyscrapers. The financial center is also attracting luxury shops and restaurants. Famous is the shopping center Eaton Centre.

It is the largest city transport line. She goes from downtown Toronto to the sleeping areas. Along College Street are interesting sights, architectural monuments. Street appeared in the 19th century and got its name from the Royal College. On College Street can be seen: the main building of the University of Toronto, a building College Park, home of the Legislative Assembly of Ontario, old mansions with unusual architecture.

How to fly from Tenerife to Moscow? Time ...