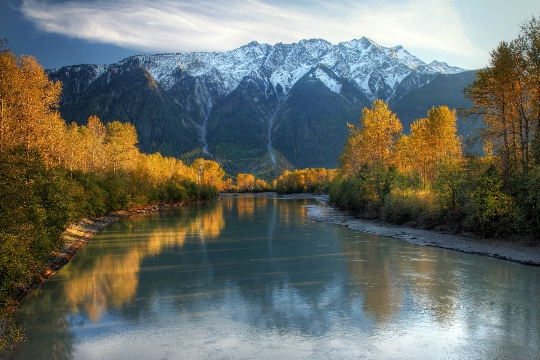 Canada's rivers are characterized by their overflowing. The entire territory of the country, if you look at her chart, almost completely covered with blue threads of waterways.

River St. Lawrence - one of the largest rivers in North America. Its track passes through the territory of the two countries - Canada and the United States. Total length - more than a thousand kilometers. His name owes to Jacques Cartier River - the founder of the French colony in the valley.

The river has always remained one of the most importanttrade routes, since connects the Great Lakes with the Atlantic waters. And if before it had traveled by fur traders, today - modern cargo ships.

Especially picturesque river becomes atpassing through the province of Quebec, forming a fjord Sagenay. The river of the same name is a northern tributary of St. Lawrence. This confluence looks quite unusual, because there is "found" the ocean water (rise here during high tide) and river flow. The channel below Montreal has many rapids. And only in the lower reaches of the river becomes calm.

In the waters of the St. Lawrence beluga and fin whales live. In addition, the river is rich in fish. On the banks of lives a huge number of different species of birds.

Miniature Canadian River (its lengthonly 54 kilometers away), entered in the list of protected rivers in the country. Its coast - an ideal place for recreation and fishing. Here, excellent fishing, filling in the tank excellent catch: carp, pike and even trout.

Interesting history and Mattawa River. Its bed for a long time (more than two centuries) was the only possibility to transport furs and fur. In the late 19th century, the river has become more popular as a holiday destination just as railways were built along the coast. Operate railroad beginning in 1887.

Buck - one of the natural attractions of the town of Nunavut. The total length of the river - 974 km.

In the waters of the river is found a huge number of differentfish species. In addition, an incredibly beautiful and shore tank. The first settlers here were Indian tribes, who called the river as "River fishing". The catch trout and sturgeon and now allows fishermen to write stories about the famous local giants.

The river banks have chosen to summer nesting numerous bird. Permanent residents are only white goose and Canada goose.