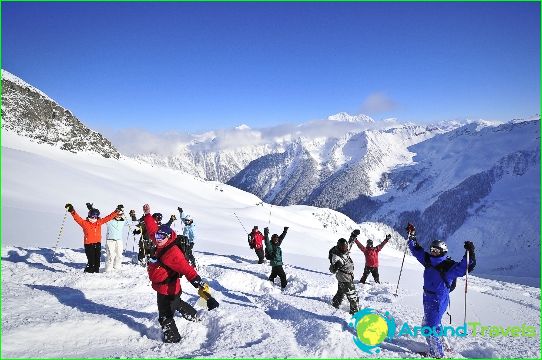 At the mention of this North American countrycomes to mind is a great hockey, fiery maples, hundreds and thousands of lakes and national parks, the likes of which beauty is difficult to find. It is not easy to get a visa, but this does not stop those who have decided to become better acquainted with all this splendor.
High quality Canadian resorts and trailsan extraordinary variety of terrain slopes - the main features. Ride here prefer not only the residents of the country with a maple leaf on the flag, but their southern neighbors of the United States. The inhabitants of the Old World believe that skiing in Canada can give a completely different look and feel.

They say that the Canadian Whistler ski area - issuper. The resort is spread not far from the Pacific Ocean, and largely thanks to its proximity to Whistler every year falls to eleven meters of sediment. Snow cover is not "petty" below the meter, and therefore feel freeriders in the Canadian resort is particularly at ease. Whistler has the unofficial title of the snow capital of the world.
The highest point of the ski area is located on theat 2,180 meters. The difference in height is more than 1.5 km, and the total number of paved trails - about a hundred. In Whistler there are ski area for beginners and for those who are standing safely on board or skis. A quarter of all descents have a category of complex and suited only to those who considers himself a real ace.
16 lifts serve athletes fromwhich two nacelles - high speed. The total number of people they are able to deliver to the launch site is about 30 thousand per hour. Almost 90 ha of ski resort is serviced by snow cannons, although the need for this practically does not occur in the high season. Border except freeride lessons can manifest itself here Chipmunk Rail Park and Wistler-halfpipe.

Adjacent to Whistler is a resortBlackcomb, which is called the main snowboard resort in British Columbia, Canada. It is connected to the Whistler gondola message that allows you to go for a day on the slopes of the two regions. Weather conditions are similar - not more than 15 degrees below zero in the mountains in the dead of winter, and the snow cover is about 900 cm.
The maximum height of Blackcomb slopes - 2280meters, of which the longest length is 11 km. The resort serve 17 lifts, seven of which - high speed. In an hour they raise 30 thousand people, and artificial snow in the case of the vagaries of the weather covered more than 140 hectares of slopes for skiing.
Snowboarding at the resort you can do in threesnow parks. Big Easy Terrain Garden, Terrain Park, and Highest Level Terrain Park is famous for the rest of Canada for its figures to perform tricks and super-pipe is able to give joy to even the most hardened dosochnikov.
Ski passes can be purchased at the resorts in approximately 100 Canadian dollars a day. The six-day ticket will cost $ 550.

This Canadian ski area celebrated invarious categories. He recognized the perfect Opportunity for families and one of the best in the world due to weather conditions. It takes its rightful place on the podium's top ski places in the world, and the country's national team maple leaf ski trains here every year before the launches of charge.
Snow depth is about 700 cm,and the ski area is located on the 1915 m level and below in the vertical drop of 750 meters. For the needs of the athletes is equipped with 9 lifts, five of which - chairlifts. Total Silver Star offers visitors 107 different tracks, one third of them - black, high-grade. They can be overcome only the most reckless daredevils and real gurus skiing and snowboarding. For green - 20 runs of the same color, which can be easily and safely learn and improve skills. The longest descent of the Silver Star is 8 km long.
Dosochnikov willingly come to this region andbecause of well equipped fan parks, of which there are as many as two. Trump, kickers, rails - range of amazing variety of shapes and device quality. A couple of decent half-pipe snowboard complete a pleasant picture.
Ski passes for a day of skiing can be bought for 75 dollars local, seasonal cost 860 dollars.

This region in the southeast of the province of BritishColombia is remarkable that on its slopes you can ski almost all year round. In the year there falls to 4 meters of snow, and the ski area begins at the level of 1980 meters. The lowest point of the local trails - 1230 meters.
In total, the resort is equipped with 70 different slopes,of which over a third took a particularly complicated. Seven trails are marked by double-black, and hence, driving them a real pro is available. There is where to learn to stand on the board or skis and most beginners. For penguins running snowboard school, whose instructors are fluent in their craft.
Dosochnikov can come off in the snow park with a variety of shapes and hone skills in the halfpipe masterfully executed.

Photos of the ski resorts in Canada