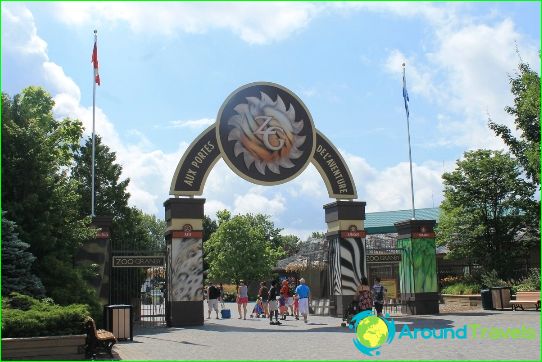 This is a state in North AmericaIt ranked second in the world by land area and almost falls into the fourth top ten list of countries by the number of people living in them. On each square kilometer of statistics here are four resident parent, and three-quarters of the population is spread out along the southern border in the major cities. But small towns in Canada also exist, and some are real tourist treasures, which are only known to initiates.

In the zoo in Granby

The town of Granby is located in the west of the country inhistorical and cultural region in the valley of the St. Lawrence River. There are still preserved home of the first French Canadians, sailed to the distant lands of the Old World at the beginning of the XIX century. The main attraction of the city with tens of thousands of residents - the largest zoo in the province of Quebec. Part of its inhabitants appeared in Granby, where the zoo in the capital region in 2006 have closed, others have lived here before. The children in Granby boasts biology lessons in the open air, and tourists enjoy visiting this small town in Canada. The main influx of visitors is in the summer due to the fact that a good water park built near the zoo.

Beautiful town in Quebec Saint-Hyacinthefamous not only for original architecture, but also well-developed tourist infrastructure. This is going to admire thematic gardens, Daniel Séguin, broken for fans of landscape design. The second attraction - Center "Expression", exhibiting the works of contemporary masters of painting, sculpture and other art trends.

The vast majority of attractionsCanada is a miraculous natural wonders. Town of Shawinigan boasts a cascade of gorgeous waterfalls, open in the middle of the XVII century missionary from Europe. Over time, the woodcutters village turned into a small city in Canada with its own power plant, a theme park, "Energy City" and regular multimedia show, passing in the halls of the former power station. From the observation tower with a height of 115 meters, you can survey the neighborhood, and the bravest are invited to look into the Devil's Hole on the Saint-Maurice River. Full of rapids, for forming a strong vortex, which, according to local beliefs, has no bottom.