Home>Articles about Chile>Chile Flag photo, history, meaning of colors of the national flag of Chile

Chile Flag photo, history, meaning of colors of the national flag of Chile 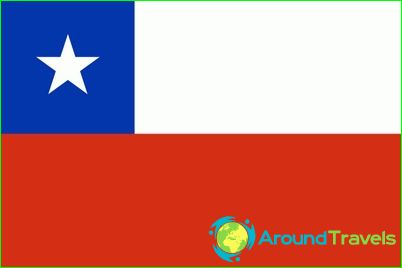 Flag of the Republic of Chile - an essential symbol of statehood, as the coat of arms and anthem of the country.

Description and proportions of the flag of Chile

The flag is the national flag of Chilelength to width ratio of 3: 2. It is a tri-color box, the lower half of which - a bright red. The upper half of the flag divided into two unequal parts. One-third of it, closest to the shaft, made in blue. On a blue field is a white five-pointed star. The rest of the field the top of the white flag.
Red cloth Chile flag - a symbol of the blood,shed patriots of the state in the struggle for the independence of the country. Blue - a cloudless Chilean sky, and white - the Andes mountain chain with eternal glaciers on its summit. The five-pointed star on the flag of Chile - is the vehicle of the country to new heights, success and glory.
President Flag practically repeatsState with the only difference being that it is applied in the middle of the country's coat of arms. Chile Coat of arms on the presidential flag - a heraldic shield, the upper part of which is blue, and the lower - red. Shield Center occupies a five-pointed star, and his slam crowns emblem - Sultan of blue, white and red feathers. On either side of the shield is the symbol of the country - yuzhnoandsky deer and Andean condor. Crown on their heads symbolize valor sea state, and based on animal ornament, ribbon entwined with the country's motto. Translated from Spanish it sounds "convinced or coerced."
Flag of the Navy of the Republic of Chile - a blue square with a white five-pointed star at an equal distance from its edges.

The history of the flag of Chile

The author of the flag of Chile is considered by Antonio Arcos,who was not only a military engineer, but also a party to the armed struggle for the independence of the continent from colonialists. The flag was officially approved in 1817, when the Spaniards were routed during the liberation battles and the country gained independence.
Chile flag has not changed for almost 200 years, in spite of all the events in the political life of the country and repeated coups.
Coat of arms of the country appeared in 1834, and came up with hisa subject of the British crown, Charles Wood Taylor. Today, the creation of the British flag adorns the South American republic and symbolizes the free spirit and rebellious nature of the Chilean people.