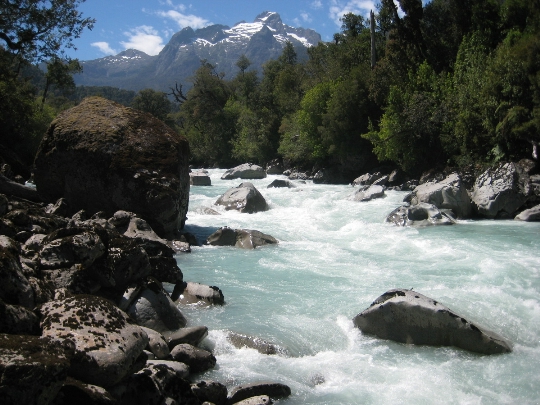 Almost all the rivers of Chile are part of the Pacific Ocean.

The river runs through the northern part of the land areaChile - Arica Parinacota. The source of the river - the western slopes of the Andes (Province of Parinacota). Billabong - Pacific Ocean not far from the Peruvian border (just north of the city of Arica). The total length of the river - hundred forty and seven kilometers.

The place is the confluence of the stream source and KarakaraniAsufre river. Approximately thirty-six kilometers of the riverbed is trapped in a canyon, and only after the water goes back into the plain, pour expanding. In the waters of the Pacific river flows, forming a wide delta.

Hydrology The river is directly dependent onrains. The rise of water has traditionally recorded in January and February. This annual phenomenon is called "Bolivian winter". The main tributaries are: Asufre; Karakarani (stream); Kolpitas (stream); Sokoroma (creek).

Geographically, the river belongs to two states- Bolivia and Chile. The source of the river - the Chilean plateau (area Arica Parinacota). After Lauck crosses the Andes, it completes the path in the waters of Lake Koypasa (Bolivia). The total length of the river - hundred five kilometers.

San Pedro - the river that runs along the northern part ofChile (El Loa Province, Antofagasta), and is a left tributary of the Loa River. The source of San Pedro - the junction of two rivers - Salalah and Cajon. The total length of the river - seventy-five kilometers.

The river is located in the northern part of Chile, passing throughterritory of Tarapaca. Total length - one hundred sixty three kilometers. The source of the river is located just west of the volcano Isluga. The main part of the channel passes through the gorges de Pampa Pampa del Tamarugal. Place confluence - Pacific Ocean (north of the village of Pisagua). The main tributaries of the river: Tiliviche; Retamilya.

Loa is the longest river of the country. The total length of the channel from the source to the mouth - four hundred and forty kilometers. The source of the River - Andes (Miño slope of the volcano). Once the river comes down from the mountains its path passes through the territory of the Atacama Desert. River banks in many places form oases. Billabong - Pacific Ocean. The riverbed is a natural border between the regions of Tarapaca and Antofagasta.

Flag of Vanuatu: photos, history, the value of the state flowers ...

How to fly from Tel Aviv to Moscow? Time ...