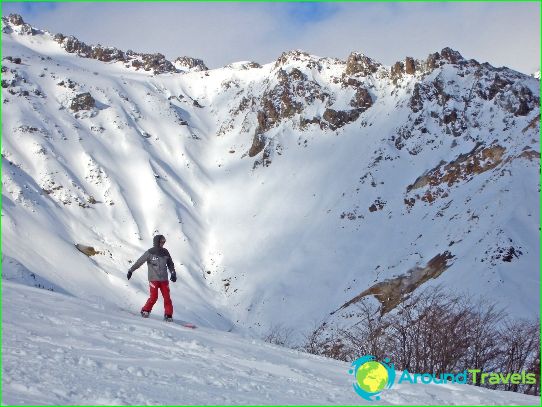 Chile - a country stretching thin stripland on the western shore of the South American continent. The main part of the country is covered by the Andes - one of the highest mountain ranges in the world. But not only attract the Andes on the Chilean ski resorts such an abundance of wanting to shoot the breeze on the hill. The second, no less weighty advantage - here you can ski in the summer. In the sense that in the southern hemisphere, where the country is Chile, Winter - June, July and August. If you add an interesting ekskursionku, the pristine purity of the snow and healthy air, it is safe to state a fact: Chile - one of the most interesting countries in the world where you can spend your holiday actively.

The oldest resort of Chile, where the first skierssnow plow started a hundred years ago, it stretches 145 km from the capital. Then here it was built the railroad, and it paves the British mastered along with the mountain slopes of the Andes. Located more than 2,800 meters above sea level, the resort is rightly called one of the most picturesque in both hemispheres.
The best season here begins in mid-June andIt continues until mid-October. The snow cover is particularly stable at this time, which gives excellent opportunities for training and snowboarding and traditional skiing. In total, the resort has 11 lifts that help athletes to begin the descent to 20 of its routes. The longest stretches almost two and a half kilometers, and elevation in the ski area reaches 750 meters.
In Portillo has something to do, and professionals, andgreenery. Newcomers provided one-fifth of the total length of slopes, where you can try your hand in the most simple slide. For those who confidently stands on the skis or board, are the other hills. However, beginners can count on professional help. The resort operates a school under the guidance of the renowned Mike Rogan, but because local trainers - these gurus who are able to have a couple of lessons taught to stand on the slope. An hour of private lessons is $ 50, group - 30 dollars. Snowboard in the resort can be rented. The cost of one day rent - about $ 25 a week will cost 160 dollars.

Less than an hour drive from Santiago - and mountain loversskiing or snowboarding in the resort are the Valle Nevado, which all the experts are among the top-end of the world. It is surrounded by chic peaks whose height exceeds 6000 meters, and the height is located at 3025 meters. Snow depth in the high season reaches two meters, and excellent skiing can last up to four months.
For dosochnikov this resort - especially significant,because it is here held FIS World Cup snowboard disciplines. In Valle Nevado built a great halfpipe, which hosts competitions of international rank by the International Snowboard Federation, and there are opportunities for boarder cross.
The resort is almost merges with the other twoChilean ski areas - La Parva and El Colorado. The entire region is a famous "Three Andean valleys' that can boast slopes of all degrees of complexity. The maximum height from which you can descend on skis - 3670 meters and reaches a height difference of more than 800 meters. For beginners, equipped with green slopes and ski school in which 60 professional instructors are ready to make the fans of winter sports and the child and the old man.

This ski area is spread in the southern partChilean Andes at an altitude of 1700 meters. It is surrounded by a picturesque forest and complements the natural surroundings of the volcano Chillán, at the foot of which are built hotels and restaurants. The season starts in late June, and the last athletes appear here in early October.
The resort is laid 28 tracks, a third of whichvery suitable for beginners. The same number of runs is intended for those who may consider themselves pro. Some trails are marked in black, but because the resort prefer to come and most advanced dosochnikov and skiers. The remaining kilometers are suitable mid-level athletes and for those who prefer quiet style of riding. By the way, in Termas de Chillan laid the longest descent on the continent length of 8.5 miles.
Rough respect Resort for an opportunity to break awaythe first in South America snowpark equipped in accordance with the most advanced requirements and principles. There are open not only halfpipe and Quarter-pipe is quite excellent quality, but also a few Trump built. And experts of the international ski school will help to master the board, even for those who first saw it already in Chile. Prices for individual lessons is quite democratic and up to $ 12 per hour. Take snowboard gear rental can be as little as $ 15.