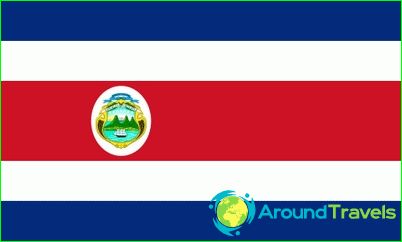 The national flag of the Republic of Costa Rica officially approved in November 1906.

Description and proportions of the flag of Costa Rica

The flag of Costa Rica has a traditionalrectangular. His primary colors - red, dark blue and white. These are the horizontal stripes adorn the Costa Rican flag. The rectangle is divided into five unequal width fields. Above and below the blue flag has horizontal stripes of equal width, followed on both sides followed by a white band width. In the center of the flag is a bright red field, the width of which is twice the width of the white and blue stripes. The ratio of the length of the cloth to its width is expressed by the proportion of 5: 3.
On the red band on the left side of the flag of Costa Ricaapplied to the country's coat of arms. He is a shield which depicts three mountains that separate the Pacific Ocean and Caribbean Sea. On each side of the ridge on the coat of arms of Costa Rica are sailboats, and for blue embroidery golden sun rises. The seven stars in the upper part of the coat of arms symbolize the region of the country, and the inscription on the white ribbon represents the name of the state. Above the shield is a ribbon of blue, on which are inscribed the words "Central America".
The official flag of Costa Rica is used by state institutions in the country on land and all the vessels of its military and commercial fleets.
Civil flag of Costa Rica is characterized by the absence of the state coat of arms on the flag, whereas the order and width of the strips on them are identical.

The Independence Day of Costa Rica in 1821 wasand approved the initial version of its flag. He lasted less than two years. Costa Rican flag while a rectangle divided horizontally into three equal parts. The upper and lower bands on the flag were pale blue, while the average - yellow. In 1823, the flag of Costa Rica only a year was a white cloth with a six-red star in the center.
Then the flag of Costa Rica once again became a three-band,only the middle of his band got white color. Recent field still remained pale blue. In the center of the cloth, which existed for only six months, the country's coat of arms was placed. It was a round seal, inside of which was inscribed equilateral triangle of gold. It depicted the mountain, towering over the sea, a rainbow and the sun, and the inscription on the edge of the circle means "the Central American Federation."

Airport Khanty-Mansiysk: diagram photo. How to get ...