Articles about Cyprus
by Kristi 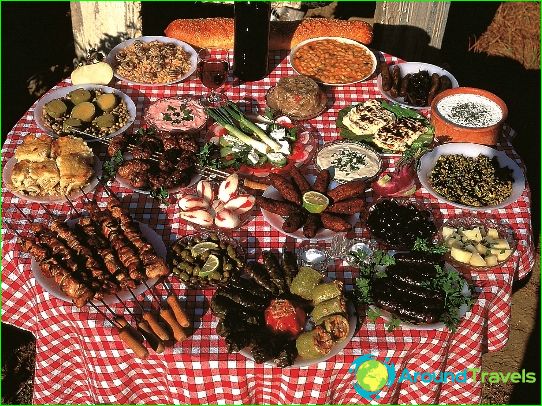 Cypriot cuisine formed under the influenceGreek culture. She also has been influenced by Turkish, British, Lebanese and Arabic cuisines. On the Greek table is always a lot of vegetables, served in a diverse way. However, local residents are not vegetarians. The main dishes consist of meat Cyprus. The main savory food is always added to salads. National kitchen belongs to the Mediterranean group. From the Turkish Cypriots and Greek cooks took over the tradition of grilling, use a lot of garlic, herbs and yogurt. This local food is less acute. Dishes are prepared in Cyprus is usually a minimum amount of hot pepper and cumin. From Italian cuisine here came the most important components of aromatic dishes: basil, tarragon, coriander, mint, arugula and cinnamon. From the Indians moved culinary tradition to eat ginger and curry.

In Cyprus, grow vegetables, fruits, olives, and others. In the northwest there is pomegranate and fig trees, in the south-west - the banana plantation. Therefore, the table is rich in Greek fresh products. Meat dishes of Cyprus is made of pork, lamb, rabbit and poultry. Beef is rarely used as cattle almost helpless. Fish on the island is not very popular, because the general population is concentrated in remote areas of the coast. From fish locals eat tuna, squid and swordfish. They are preparing fried or roasted.

Salads traditionally sprinkled with lemon juice,both fish and meat. Therefore, an important attribute of the table are the sliced ​​lemons. Mandatory addition of foods are olives. More exotic snacks are baked in foil olives. Cypriots consume much less olive oil than other Mediterranean nations. For meat and fish dishes are usually served tzatziki - thick sour yogurt with mint, cucumber and garlic. This dish is very refreshing, and therefore goes well in the summer heat. Tzatziki - a name borrowed from the Greeks. Cypriots themselves indicate this food as talaturi.
The chefs use only fresh products thatIt provides food delicious taste. Every housewife in Cyprus is sure that if the dish has lost the freshness, that is, it can not be. For a snack locals use pita with souvlakia (kind of barbecue). Such food can be supplemented with a salad. Overall, Cypriots use light and healthy food. Their diet is dominated by vegetable fats. Dish number one in Cyprus stands kleftiko lamb.

Milan for kids - something to see. Where ...