Home>Articles about Cyprus>The national drink of Cyprus. Alcohol in Cyprus: the price, the export, the export rate of alcohol

The national drink of Cyprus. Alcohol in Cyprus: the price, the export, the export rate of alcohol

Articles about Cyprus
by Klaid 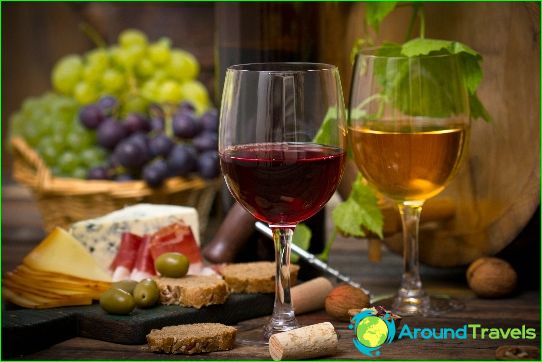 The Mediterranean island of Cyprus is known infans of a beach holiday as a cozy place where you can find and noisy company, and privacy, and active entertainment. This fly gourmets and music lovers, divers and fishing enthusiasts, and Cyprus Beverage suddenly impression even at advanced vinolyubov. There is an opinion that it is a sunny island Crusaders have taken the vine, gave birth to the famous wines of Champagne and Burgundy.

As a member of the European Union, Cyprus is subject to generalthe rules of the import and export of alcohol. You can not bring a liter of spirits and two - fortified wines. However, to carry on the Cyprus wine - the idea unviable because it is on sale on the island and is served everywhere, and at very good price. A bottle of dry red or white local wine will cost 3-5 euros maximum, if you buy it at the supermarket (as of the beginning of 2014). The beer is 1.5 euros per bottle, while the price of a decent wine in bags and not more than 3 euros per liter.

The national drink of Cyprus

The honorary title of the national drink of the islandAphrodite can deservedly be awarded local wine Commandaria. Its history begins in the XIII century, when the Knights Hospitaller of the Order received the land here and built a vineyard. Their wines quickly gained popularity in Europe and has become the main focus of the island's exports. A popular and favorite drink is made from Cyprus Mavro grapes, and its first award he won back in 1213 on the famous French wine competition. The last in 1362 in London, "Feast of five kings," secured the success of Commandaria, and since then the legendary wine of Cyprus - the best gift and souvenir brought from the Mediterranean traveling.

Wines of Cyprus have been mentioned in the Bible, but becausewe can safely say that their history goes back many centuries. The most popular alcoholic drinks in Cyprus offers every self-respecting cafe or restaurant:

And in the restaurants guests will certainly be offeredaromatic coffee and fresh juices, soft drinks and a glass of sherry from the chef at the end of a nice meal in the shade of centuries-old olive trees, which are well remember how knights kissed first solar cluster in their own vineyards.