Articles about Cyprus
by Back 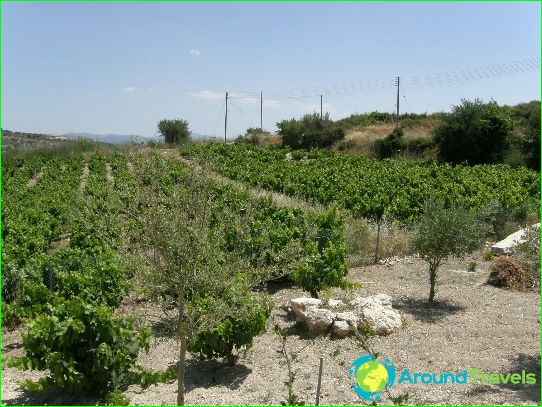 History of Cyprus wine has more than oneten centuries. Historians and archaeologists believe that the first attempts to get the wine on the island belong to the IV millennium BC Industrial basis under Cypriot wine has been placed in the middle of the nineteenth century, when it became the first winery to deliver products to the local and international markets on a commercial scale. Since then, the wine of Cyprus - an integral and a considerable part of the local exports.

On the legendary Commandaria

Connoisseurs of wine at the mention of the name of the islanddreamy smile and instantly present glass of fragrant Commandaria - rich brown dessert beverage, which clearly discern notes of honey, caramel, raisins, and even cinnamon. This wine of Cyprus - the most famous. It is used in religious ceremonies and drink at weddings and anniversaries. Without Commandaria not do any one event in Cyprus, so this product can be recommended to tourists and as a traditional souvenir. Delicious Commandaria is best combined with the goat cheeses produced here in Cyprus.

This option is becoming a holidaymore popular among Russian tourists. On the island of Aphrodite except pristine beaches and ancient amphitheater there are wineries to which excursions can be entertaining and interesting points of travel.
Introduction to wine production is carried out in Cyprusin such enterprises experienced oenologists. for the preparation of wine experts tell guests in detail about the technology of cultivation of grapes and the process of manufacture beverages. Guests wineries demonstrate equipment and show the famous cellars where the wine kept the best of the sunny island.

Due to the climatic features of Cyprus andits hot climate in the grapes grown on the island, formed by the high content of sugar. This allows the wines of Cyprus to be especially fragrant and somewhat stronger than in other regions.
White wines on the island is traditionally produced fromXynisteri fruit varieties. Aged at least six months in oak barrels Petritis Xynisteri has subtle woody scent, which contains notes of pineapple.
Among the red wines of Cyprus is considered to be the true king Maratheftiko, which is similar to Shiraz. Its dense purple color and a solid fortress complemented by aromas of cherries and truffles and cinnamon aftertaste.