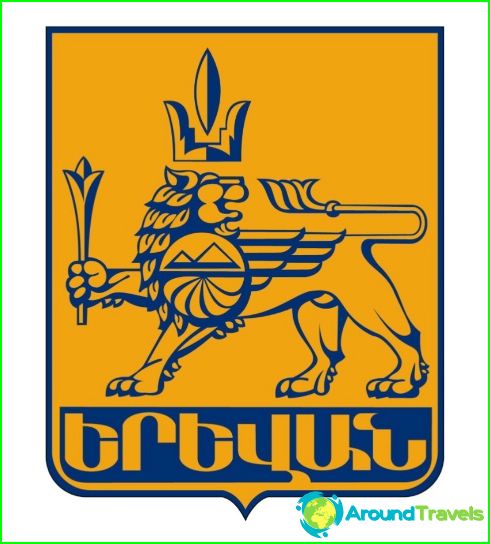 Little Bohemia - a worthy competitor interms of tourism for many major countries in Europe. Most visitors start their acquaintance with the country and its capital city, one of the oldest cities in this part of the world. And even the coat of arms of Prague is reminiscent of its main attractions and a rich history.

Prague emblem is the official symbol of the city, is used by the city authorities in various documents, but also its image appears on photos, postcards, mugs and other souvenirs.

There are two versions of the main officialsymbol of Prague - the small and large coat of arms. Small sign - a billboard of scarlet, which includes the following elements: a fragment of the fortress wall; three golden towers that adorn the wall; hand holding a sword.

The wall was built on a small emblem of thecut stone, decorated with silver teeth. Its gates wide open, lattice, closing them is raised, it symbolizes the openness of the city, ready to receive guests.

On the other hand, out of the gate visible hand of the knight,dressed in armor. In his hand - raised high the sword of the value of the symbol is quite simple, the willingness of citizens to defend the beloved capital, gold of Prague. Symbol of the city in this way appeared in 1694, it is linked to specific historical events, in particular, the defense of the city from the visitors from the north of Europe, namely the Swedish invaders.

Those characteristics are relevant to the large coat of armsCzech capital. If the small sign looks quite succinctly, the elements that decorate it, make the image fantastically chic. Firstly, there are two supporters, in their role are the silver lions. Carnivorous animals, known heraldic symbols, the coat of arms of Prague are in the golden crowns with protruding tongues of the same color.

Another method, pronounced division intoend of tail, often used to create images of animals on the official signs. chargers Company is a lion crowning composition.

Secondly, the city coat of arms has a base toHe selected branches of linden tree, rarely used in heraldry. Here on the background branches located scarlet ribbon with a motto which says that the head of the republic is Prague.

Bus tours to Switzerland. The cost of bus tours ...

Airport Kurgan: diagram photo. How to get ...