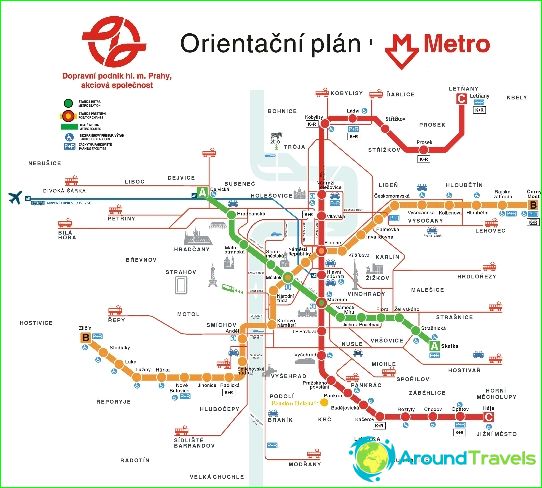 Driving Prague metro
Prague metro system is consistent with the generalEast European model with three basic lines forming a triangle in the center of the city, passing through tunnels far below the city streets. Most of the stations on the line A and line B are very deep and are served, usually with three long escalators. For this reason, due to heavy floods in the middle of August 2002, some central metro station were closed in Prague. Tunnels C lines relatively shallow.

The total length of all the Prague metro lines is 59.30 km, number of stations - 57: A line (13 stations, length - 10,99 km), line B (24 station, 25.70 km), On line (20 stations, 22 61 km).
Although the Prague metro system is relativelyyoung, the idea of ​​organizing an underground transport in Prague appeared more 1898, its author was the company Ladislav Rott. Rott suggested that the city council to take advantage of the construction of urban sewage and parallel to this work to begin tunneling underground. However, the plan has not been adopted. Another proposal was made in 1926 by Bohumil Beladi list and Vladimir, who first used the term "Metro". Although, this project has also been rejected by the authorities, the discussion was the impetus for the transition to the real deal with the growing problem of transport in Prague. In the 1930s - 1940s, intensive projection works were carried out, taking into account the two possible solutions: an underground tram and metro in Prague with a full independent system of railroads. After World War II, despite the fact that the plan for the construction of three subway lines - A, B and C has been thoroughly developed, all work was stopped due to the poor economic situation in the country.
In the early 1960s, it adopted the concept of the undergroundtram, and in 1967 even started construction of the first plant. However, in the same year, under the influence of the Soviet experts, the concept has changed the polarity of the Czechoslovak Government made a final decision in place of the tram tracks to build a true subway system. Regular passenger service began on the first section of Line C in the Victory Day May 9, 1974 between the stations Sokolovská (now Florenc) and Kačerov stations. Since then, the Prague Metro began to evolve rapidly.

After the last train in July 200981-71 class was taken out of service, line A (35 trains) and Line In (52 trains) trains operate with upgraded Class 81- 71m, and the line to serve only the M1-class new trains (53 trains). The evolution of the metro can be studied at the Prague Museum of Transport, having once in the exhibition mostly old trams and buses, but for some time now offering an excellent overview of the history of the Prague Metro.


Tickets to the Prague metro

To pay for travel to Prague metro used,as in the rest of the Prague transport tickets (jízdenka) for a short period of 5 days or longer tickets (kupon), calculated for the period from one month to a year.