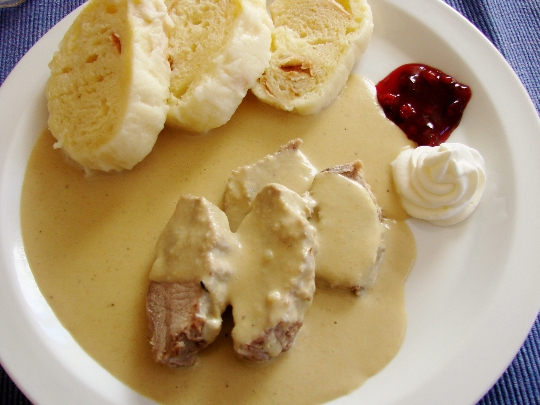 Kitchen Czech Republic - the result, as the local gastronomic traditions and borrowed from neighboring peoples: it satisfying, replete with meat and first courses, which are prepared from natural products.

A special role is given in Czech cuisine soups: then cook, for example, chesnechku - garlic soup and tsibulachku - onion soup with croutons and cheese. A major role in the local cuisine belongs sauces - Czechs them prepare horseradish, tomatoes, cucumbers, sour cream, cranberries, onion or garlic (as a rule, the foundation acts as a meat broth). As for meat, the main "guests" of the Czech table are chops and steaks, fried and stewed dishes of pork, poultry and game, stews and pies. We should also mention the dumplings - boiled pieces made from potato flour or dough: they are not eaten as a separate dish, and served as a side dish to meat.

You are going to visit a popular restaurant food? Book a table in advance. And if you plan to visit them on weekends and Friday night, keep in mind that good cafes and pubs are often overflowing with people at this time.

Refreshments in Prague can be "V Zatisi" (guestsrecommend to try lamb chops and baked goose fed with sauce), in Karlovy Vary - in "Chodovar" (in this beer restaurant serves traditional Czech dishes, indulge guests with fresh beer, offer to visit the 45th minute on a brewery tour, located on the territory of restaurant) in Brno - in "Pivovarska pivnice" (lovers of beer in this bar can have a beer and a bite to eat his sausages, grilled). Tip: as many institutions often charge additional fees (restaurant tax, fee for service, couvert - charge for a basket of bread and spices, or for a set of cutlery), is unwilling to pay more should be selected restaurants without any additional "paid service".

Cooking classes in the Czech Republic

In the Prague Culinary Institute wishingThey offer to take a course of culinary skill, where they will introduce step by step with classical Czech cuisine and learn to cook meat dishes and sauces. In addition, in Prague, you can visit a cooking school "Chefparade", where those wishing to learn to cook old Bohemian cabbage soup and smoked pork goulash with dumplings, fruit dumplings with cottage cheese and other dishes.

In the Czech Republic you can come to the Pancake feast(January, February, Beroun and Prague) Gastronomic Festival "Gastrofest" (November, Ceske Budejovice), the festival "Prague Food Festival" (May, Prague), the Fish Festival (August, Brno).

Kitchen Monaco photos, dishes and recipes of the national ...